With millions of square feet of industrial space under construction in the area, a developer is working on plans for a 100-acre mixed-use project that would provide new housing and retail in Wilmer.

Liberty Multifamily plans to build the project on a vacant tract at Interstate 45 and Mars Road.

The city of Wilmer just approved plans for the development called Liberty Crossing.

“We see a lot of growth going on in that area but there aren’t many housing options,” said developer Richard Ashton. “We want to bring in sustainable workforce housing.

“We think Wilmer has been overlooked by developers,” Ashton said. “We have a 100-acre prime property in a booming area.”

Liberty Crossing is laid out to have retail and restaurant buildings along the freeway.

Apartments would be constructed behind the retail.

“We are planning at each 144 to 160 multifamily units and we are working with retail partners to develop the retail and commercial portion,” Ashton said. “We are also looking at 68 rental townhomes and 90 single-family houses.”

The developers said he’s wooing a medical provider, too.

“With this growth, a vacuum has been created for new single-family residential, multifamily and retail facilities,” Wilmer city councilman John Eggen said. 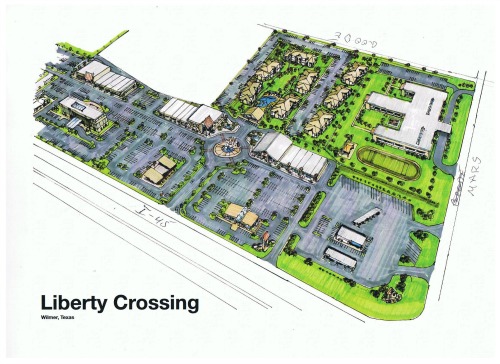