Oak Cliff - A string of suspected arson fires at vacant homes in east Oak Cliff has some neighbors ‘scared’ to go to sleep.  The Dallas Fire Department responded to three vacant

house fires within an hour-and-a-half span Friday night in a neighborhood near E. Kiest Blvd and Texas State Highway 342.

No one was injured at any of the fires.

Dallas police used a helicopter Friday night to search for potential suspects, but no arrests have been made and fire investigators are keeping the cause of the fires under wraps.

O.V. Waters lives next door to one of the vacant homes that caught fire.  The heat from the fire next door melted the paint on the side of his home.

“It’s got me scared to go to sleep tonight because I’m thinking this house is going to be on fire next door,” he said.

Waters said this is the third time the vacant house next door has caught on fire.

Several neighbors said they would like to see the city tear-down the homes in their neighborhood that have been vacant for years.

“I’m tired of these house looking like that, “Waters said. “They need to be torn down.” 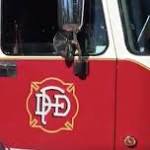