Man arrested in connection with string of home invasions this week in east Oak Cliff, 3 suspects at large

Tips and surveillance footage helped police piece together a description of the suspect and a vehicle involved in the robberies, Major Jimmy Vaughan said at a news conference Saturday. Police located Leija about 2 p.m. in the described vehicle driving through the neighborhoods where the offenses had occurred, police said.

Police are searching for three other suspects connected with the robberies.

One is a Hispanic 5 foot tall female with brown hair and visible tattoos on her chest. She was last seen wearing a pink shirt.

Another suspect is a light-skinned black or Hispanic male who was last seen wearing a red and white zip-up hoodie, white T-shirt, blue jeans and white basketball shoes with a black do rag on his head.

The third suspect is a 5-foot-10 heavy-set Hispanic man between 20 and 25 years old weighing about 230 pounds and wearing an orange T-shirt.

Three home-invasion robberies took place early Monday morning and the latest was Thursday morning. In all four robberies, the suspects were held at gunpoint.

There's no evidence that the robberies are linked to another home-invasion Tuesday in Red Bird in which a Dallas mother was found dead, police said.

The latest robbery was reported about 4:30 a.m. Thursday at a home in the 3300 block of Idaho Avenue, south of Kiest Boulevard. 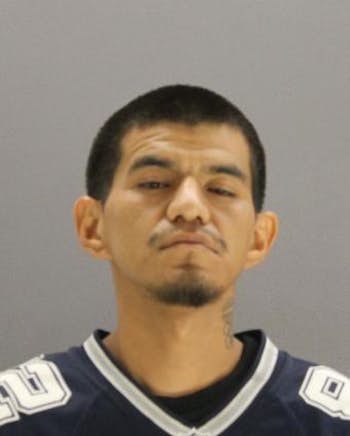 Two intruders kicked in the door of the home and held the people inside at gunpoint before stealing property and fleeing, leaving the victims unharmed.

The vehicle they drove was an older-model red sedan, possibly a Honda. That description matches the suspect vehicle in the home invasion that occurred about 6:45 a.m. Monday in the 2900 block of Britton Avenue.

Thursday's home invasion was the fourth in the neighborhood this week. Three were reported in a 90-minute span Monday, all involving robbers who demanded property at gunpoint, police said.

About 3 p.m. Tuesday, a Dallas mother was found dead in another suspected home-invasion robbery. Roseli Paz-Perez's husband found her in their Red Bird home in the 9300 block of Sedgemoor Avenue, near Danieldale Road and Interstate 35E.

Home invasions are tallied in police records as "individual robberies," a crime that has decreased so far this year.

About 2,300 individual robberies were reported in Dallas — about 150 fewer than last year — between Jan. 1 and Aug. 31, police records show.

Blankenbaker said police have stepped up patrols and have officers walking the area to encourage residents to institute active crime-watch efforts.

He said there's no evidence that the robberies are gang-related.

Anyone with information about the east Oak Cliff robberies or Paz-Perez's slaying is asked to call investigators at 214-671-3679.