He’s since been suspended from the clergy, accused of sexually abusing three teenagers a decade ago, and of stealing $60,000 – $80,000 from the church. 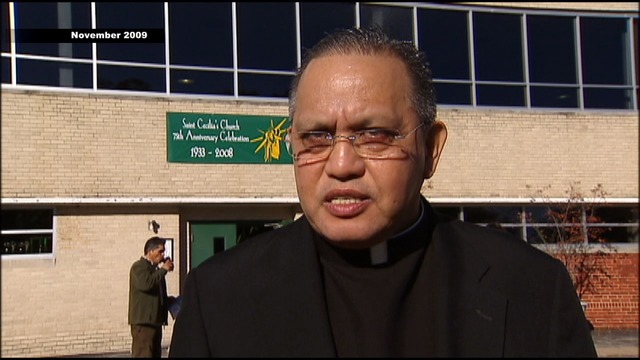 Exact details on when the crimes happened are not clear. The church sasy the Saint Cecilia Catholic School was not involved in either allegation.

The Dallas Diocese says it learned of Paredes’ possible wrongdoing in February last year. Leaders say they told police soon after the alleged victims, now adult men came forward, but only altered parishioners this weekend, after church sex abuse claims from other parts of the country were revealed.

“When there is a wolf in sheep’s clothing that is terrifying enough but when there is a wolf in shepherd’s clothing that is horrendous,” said Dallas Diocese Bishop Edward J. Burns. “We recognize too that if we are ever going to rebuild trust or regain credibility those are bi-products of doing what is right and we have to do what is right in all of this.”

Dallas Police are investigating. The church has hired private investigators to find Paredes. He may be hiding in his home country of The Phillipines.

If there are more victims, they are asked to contact police and the church’s victims assistance coordinator, Mary Edlund 214-379-2819