You Can Now Stream the Texas Theatre’s New Movies Online

Oak Cliff - I’m amazed by how quickly this has rolled out: In a partnership with Film Movement, the Texas Theatre is now offering streaming of new films online. The process is simple.

Go to the Texas Theatre’s website, click on the “watch now” link, pay for your “virtual ticket,” and you’ll get to see movies at home that would have shown in the theater this weekend. With this set up, the Texas Theatre gets to keep a portion of the proceeds, the film distributor keeps the other portion. The Texas Theatre says it is using the funds raised by the virtual screenings to help compensate their staff during the COVID-19 crisis.

The new program launches this week with The Wild Goose Lake, an Asian crime thriller that feels like a throwback to Hong Kong cinema of the 1990s, and Corpus Christi, a Polish film that was nominated for an Academy Award for Best Foreign Language Film. The virtual screenings work not unlike a regular release. The links go up the Friday the film is set to be released and will remain active for  a week. You’ll have a 72-hour period to watch the film after you rent it. In order for the Texas Theatre to receive revenue, you have to click on the link through the website, so share that far and wide. 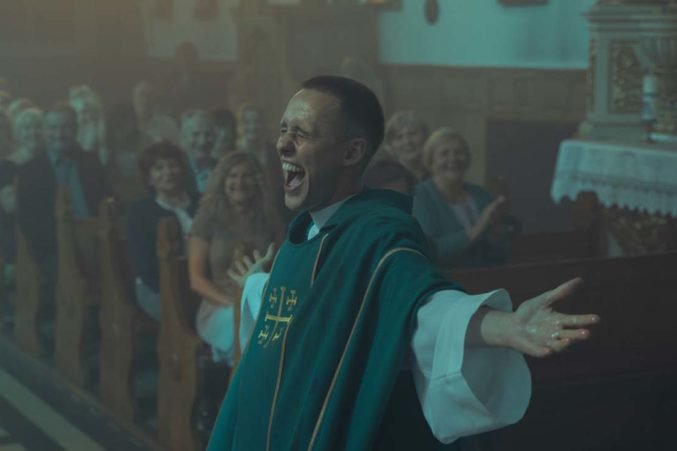 A still from 'Corpus Christi,' which the Texas Theatre will stream to patrons this weekend.

The Texas Theatre’s Barak Epstein says independent film theaters and distributors are working quickly to create new ways of offering films to their customers, while generating some revenue at a time when theaters around the country have been forced to close. While some major movie studios are offering their new films straight to streaming networks, independent distributors understand they can’t cut independent theaters out of the process during this time of crisis. This new platform offers some encouraging news at the end of a week that has offered very little. It shows how quickly things can evolve, and it suggests the many ways society and culture will continue to shift and take new forms as we adapt to a strange new normal.