Oak Cliff - Another outburst over required face coverings has been captured on camera.  This time, at an Oak Cliff grocery store where a shopper lashed out after reportedly refusing to keep her face mask on inside the building.

Fiesta Mart employees and customers could only watch as an unidentified woman began flinging food items in a profanity-laced fit of rage.

The incident happened Saturday afternoon at the Fiesta Mart location in the 3400 block of West Illinois Avenue, according to Dallas police.

Omar Guillen witnessed the incident and captured part of it on camera.

He said the shopper was wearing a face mask but took it off near the register.

Fiesta Mart’s website advises customers that face masks are required inside its stores to help stop the spread of coronavirus.

Guillen said a manager approached the woman and asked her to put her mask back on citing local requirements.

The manager said she would not be served if she did not comply.

The woman began tossing items in her cart, including chicken and produce, onto the floor. 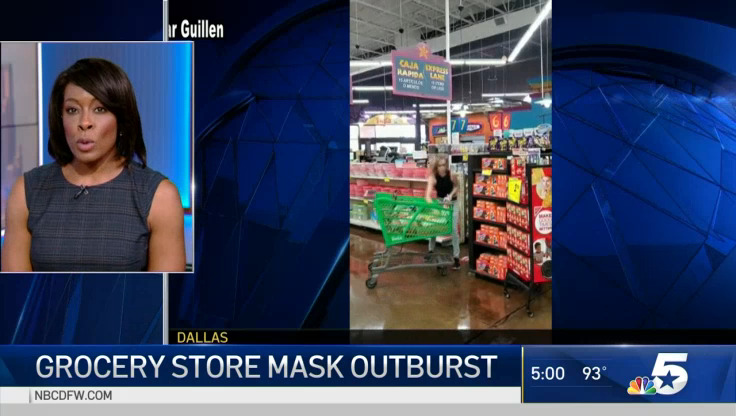 Dallas police confirm they were called to the store but the unidentified woman ‘fled’ in an unknown direction.

Employees were left picking up her mess.

Huddleston said the association has seen an increase in similar confrontations statewide, especially during the second wave of COVID-19.

“The retailer can be held, in some cases, liable for not having customers wear face-covering then it’s become more important that the employee at the door, when they’re greeting customers convince them to wear face coverings if they don’t have one on.”

Huddleston stresses most customers have complied.

Some confrontations have become physical, including an incident at the My Eyelab store in Cedar Hill on June 6.

Security cameras captured a man shoving a female employee to the ground after she tried to enforce a face mask policy in the store.

Cedar Hill police are still searching for the man.

Huddleston reminds customers retailers can turn you away for not complying with rules.

“We’re not in the business of denying service and we just ask during this period of time for all customers to wear their face covering and then we’ll all get through this together,” he said.

The Fiesta Mart manager told NBC 5 they had no comment regarding the incident.