DeSoto, TX - High rates of young black people are living with high blood pressure, diabetes and stroke, according to the Centers for Disease Control and Prevention.

Doctors said nutrition and lifestyle could be to blame, so a South Dallas chef and business owner set out to make a difference.

Behind the counter of his DeSoto smoothie bar, James McGee whipped up a dish you wouldn't typically find in this 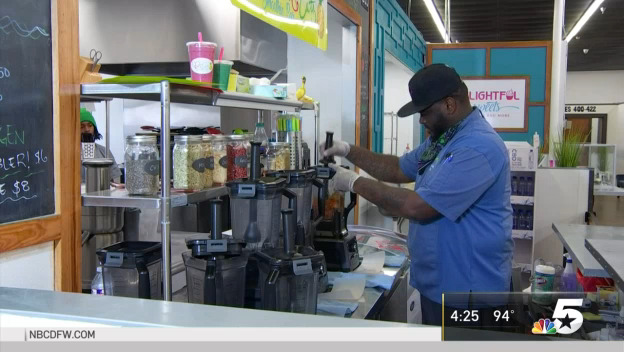 A South Dallas chef lost 100 pounds after switching to a plant-based diet. Now, he is setting out to change how his predominantly black community views healthy food.

His place, Peace.Love.&Eatz, is one of several vegan and vegetarian dining options that have opened in the area of South Dallas.

It's a shift from the kind of food McGee said he grew up on.

"How I grew up, when your parents are taking you to McDonald's all the time, which we understand is convenient, but you need to incorporate vegetables and fruit more into your lifestyle and your kids' lifestyle," McGee said.

McGee became a vegan three years ago. He weighed 390 pounds.

He said his liver and kidneys were failing and doctors told him he'd have about a year to live.

"I got to be there for my kids, so I just went home, changed everything, threw away all the bad stuff in the house and became plant-based the same day," he said.

McGee lost 100 pounds and said he is off medications.