Red Oak, TX - The expansion of a longtime convenience store in Red Oak is expected to provide more services for the industrial truck traffic that rolls through Red Oak, as well as hard-to-find options for people with smaller vehicles.

The Red Oak Travel Center, located at the southeast intersection of Interstate 35E Frontage Road and Daubitz Drive, will be renovated and expanded after the Red Oak City Council voted last week to rezone 7.3 acres from Highway Oriented to Planned Development 130 to allow for a truck stop use. 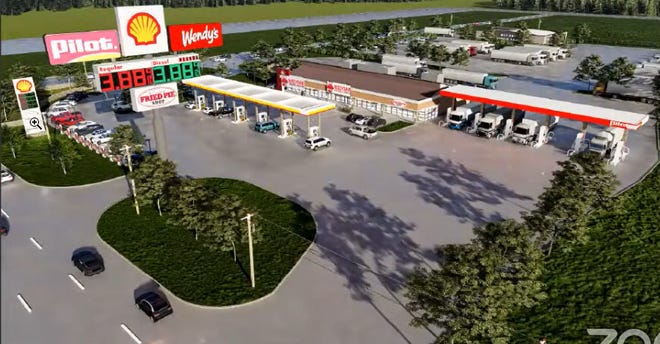 Mohamad Elchehimi, vice president of development at Victron, said the travel center, formerly Knox Super Shop, will be expanded to include a larger area for industrial trucks to park.

The site will also be expanded for a possible two-bay industrial truck repair shop, which would be located east of the main convenience store.

Elchehimi said these types of truck services are important since the corridor along I-35E south of I-20 has some of the highest truck counts in the country.

“The reality of the world, especially the post-COVID world, is that the demand for industrial, the demand for e-commerce is absolutely booming,” Elchehimi said.

He said fencing and cameras will help ensure illegal activity does not take place.

Landscaping will buffer to the east, where there is city-owned property and a church.

But with 30% of the site’s use projected to be for industrial trucks, Elchehimi said this won’t be a truck stop in the typical sense.

“It’s an important part of who we are, it’s important as industrial and diesel demand continues to grow, but it’s definitely not all that we’re offering,” Elchehimi said.

He said the store will feature a new drive-in style gas pump station with the addition of E0 ethanol-free fuel for boats, sports, cars, etc.

“We’re going to be the only gas station and convenience store in all of Ellis County, that I know of, and all of the south Dallas County area that’s going to have this fuel type,” Elchehimi said. “So we know that we’re going to bring in folks from all over the place who will want to come get this.”

He said the station will also include eight Tesla supercharging stations, which he said will also be new to the Ellis County/south Dallas County area.

He said supercharging stations charge a vehicle in 15-30 minutes.

Elchehimi said there will also be chargers for other types of electric vehicles.

Another piece to the update is replacing the existing Pizza Inn and Subway restaurants in the main building with a 3,500-square-foot, 24-hour Wendy’s restaurant with a drive-thru. Elchehimi said the Wendy’s restaurant would provide 30-plus jobs and bring in $2.4 million in additional tax revenue.

He said the project will also include a renovated and expanded outdoor seating area with a dog park.

The council supported the project but had concerns over the use of Daubitz.

Mayor Mark Stanfill said he is concerned about the additional heavy truck traffic on Daubitz and how it will impact the condition of the road.

Elchehimi said developers would pay for upgrading the road if it meets the requirement to do so but noted the road has held up well for years.

Councilman Willie G. Franklin Jr. said he was concerned about the large trucks having enough room to make a right turn onto Daubitz from the frontage road.

City officials said the lanes are wide enough to handle the turns and that there have not been any incidents involving large trucks at that intersection.