Red Oak, TX - Donald T. Shields Elementary is a part of Michael Elrod’s family.  His two sons came through here on their way to graduating from Red Oak High School.

His wife, Mickey, taught at Shields for about 18 years.

Mickey died last summer, but when students resume classes Tuesday, a part of her memory will follow them. The school library is named the Mickey Elrod Learning Commons.

Now, that family has had a week to move everything that could be saved from the tornado-gutted school in Glenn Heights to a former junior high in Red Oak more than three miles away.

Elrod, who preaches at Ovilla Church of Christ, gathered with hundreds of Shields supporters who packed the cafeteria of the old Red Oak Junior High on Monday. They celebrated the resumption of classes — and recognized the massive effort involved in transforming the once-vacant building into a temporary home for Shields, which was heavily damaged Dec. 26.

The gathering served as part vigil, part pep rally as visitors were encouraged to “saturate Shields with prayer” in the hallways and classrooms and outside. Afterward, parents toured the building with students to find out where their new classes would be.

Although much of the old building was gleaming, not all the work was complete. Drilling noises came from the cafeteria’s cooking area just before the vigil started.

“I couldn’t imagine what happened, and I couldn’t believe how this community came together ... to get things in place for a new semester,” Red Oak ISD Superintendent Scott Niven said. “We had one week to get this done.”

Volunteers from all over the country converged on the area in the wake of the storm, and many of them were saluted at the prayer vigil.

The damage “was breathtaking, really,” said Dustin Askew of Buna, a volunteer with North Carolina-based Samaritan’s Purse, a nonprofit, faith-based organization that provides relief in times of crisis. “People lost their whole lives in one day. We just are here to help and let them know that God is looking out for them.”

Jack Ables, pastor of Eastridge Baptist Church in Red Oak, said several members of his congregation teach at Shields or have children who attend.

“It’s been kind of amazing,” he said. “They have undertaken this project with a zeal that I don’t think I have ever seen.”

Red Oak natives Brandon and Tai Smith, who live about 150 yards from the destroyed Church of the Nazarene, watched the tornado advance from their back porch before they hurried their two children into their master bedroom closet.

One of the Smith children, fourth-grader Kenedy, is a Shields student. Son Easten is a student at Red Oak Middle School.

“It’s like the first day of kindergarten all over again,” Kenedy said. “I got all confused.”

Niven said the district has taken steps to ease that confusion for teachers and students, saying new school supplies have been put in every classroom.

“Don’t worry about anything you need,” he told the crowd. “It’ll be in their classrooms waiting for them.”

Several school officials emphasized that Shields’ new home is only temporary. The district has said it hopes to return to a newly repaired Shields building in the fall.

“I’ve been telling our kids that this is an adventure,” Shields principal Shondra Jones said. “We are on a semester-long field trip.”

Jones also reassured parents and teachers about the school’s mission.

“No tornado can destroy who we are,” she said. “It cannot define what we do. We are a family.” 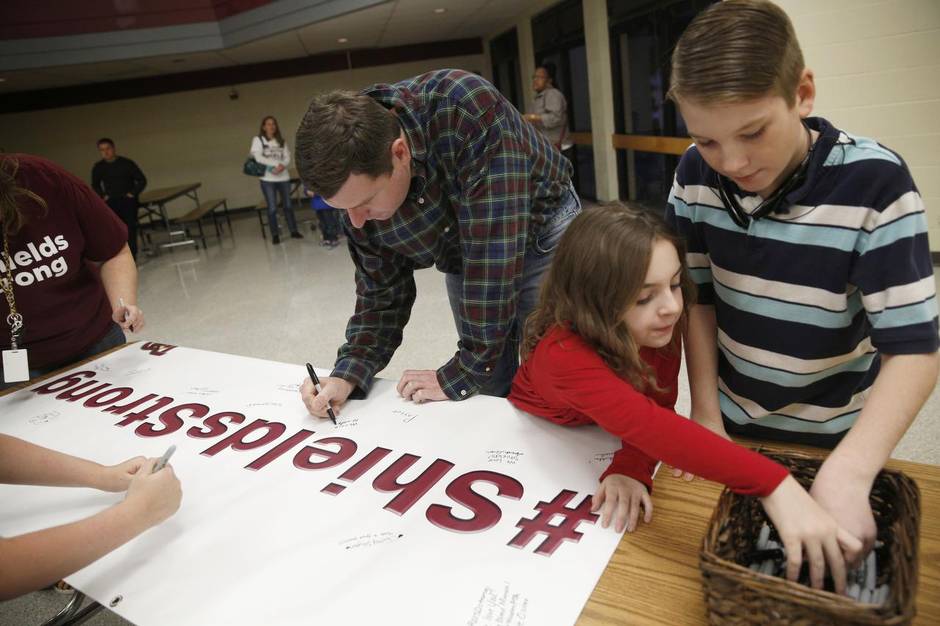 Glendon Allen signed a poster with his kids Hannah, 7, and Holden, 10, during a prayer vigil and open house Monday at the old Red Oak Junior High, which is serving as temporary home for tornado-ravaged Shields Elementary School.