Red Oak, TX - It has quickly become apparent that Google has chosen Ellis County as its newest unofficial hub following a unanimous vote by commissioners Tuesday.

Just as the foursome had previously decided in late July 2018, Ellis County commissioners approved a 10-year tax abatement agreement between the county and Alamo Mission LLC, which represented Google as a shell company throughout the negotiation process. For historical reference, Google operated under the umbrella of Sharka LLC during the mediations with the City of Midlothian that led to that project’s groundbreaking.

In contrast to the initial negotiations, however, Red Oak city manager Todd Fuller made it quickly and publicly known to the City of Red Oak that the tax-abatement proposal between Alamo Mission LLC and the city was concerning negotiations with the tech giant.

Fuller informed the council and those in attendance during the Red Oak City Council meeting on July 8 that city officials had reached the point of extending the tax-abatement offer to Google and its subsidiaries.

Fuller has since stated that “although we are excited and hopeful at this point, the final deal is not yet complete.”

“There are still additional steps in the process before Google will finalize the purchase of the property, including tax abatement incentives with Ellis County, so no timeline for development has been established,” Fuller added. He further noted the actions by the Red Oak council and Ellis County commissioners is the first step in concluding the process that has unfolded over the past several months.

The Red Oak data center will be constructed on 166 acres in the northwest quadrant of Farm-to-Market 664 and State Highway 342, which is across Ovilla Road (FM 664) from Triumph Aerospace Structures. Fuller stated the land is currently used for agricultural purposes.

Much as the agreement signed previously by the county commissioners and the City of Midlothian, Red Oak and the county have agreed that 100 percent of personal property and 80 percent of improvements would be eligible to be abated in phase one.

The exact monetary terms of either agreement have not yet been released to the public. 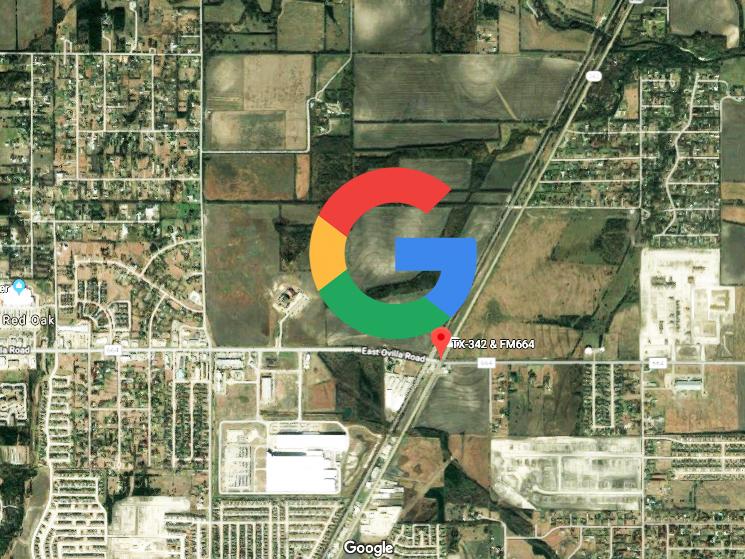 A second difference in the two contracts is that Google has already agreed to invest an initial $600 million minimum into the Red Oak facilities; whereas the Midlothian contract called for an initial $500.

Google did, however, recently announce during a media-only presentation at the Midlothian site that the tech company would invest $600 million into its location in the Cement Capital.

Both agreements state Google will employ a minimum of 40 full-time employees by the end of the fifth year of occupancy. The two abatements are to begin Jan. 1 of the year following the City of Midlothian and the City of Red Oak, respectively, issuing a certificate of occupancy.

There is also no limit — outside of acreage — to the number of phases for either project and the abatement applies to all stages of the data center’s expansion.

“Although we are still early in the process, we are extremely excited about the possibility of a second Ellis County Google site here in Red Oak,” stated Red Oak mayor Mark Stanfill in a media release. ”[...] Google is a great corporate citizen that gives back to communities in which they are located. We hope to establish a long term relationship with them that will benefit Red Oak and Ellis County for years to come.”

According to a press release issued by the City of Red Oak, Google choosing to construct a data center in the city would “create additional indirect employment within the Red Oak area, both during construction and permanently.”

In total, McCleary stated the county as a whole would receive approximately $6,816,120 each year in ad valorem property tax revenues. He also noted those numbers, which are all approximations, could increase if tax rates are ever raised.

“I am excited that $60 million could be paid into my school district over the next 10 years,” said Todd Little, Ellis County judge and Red Oak resident, to the commissioners’ court. He noted those funds could construct a new school at little cost to the citizens.

According to the City of Red Oak release, outside of the $600 million investment into the data center itself, the city can anticipate approximately $475,000 in annual property tax revenue — even with the tax abatement.

“Additionally, the city would see revenues generated from electric utility franchise fees,” the release continued. “This would also create a significant positive economic benefit to the Red Oak ISD since they are not involved in the tax abatement.”

Rick Reeves, who lives within the ETJ of Red Oak, spoke to the commissioners’ court Tuesday and stated he was against the tax abatement.

“Please consider giving away subsidies to one of the world’s largest companies,” Reeves stated, urging the commissioners to consider assets such as water and the potential impact a data center would have on those resources.

Dan Altman, of Midlothian, spoke in favor of abatements and, specifically in favor of an abatement for Google. He noted offering a tax abatement to a new grocery store to compete with those already established would present a higher chance of failure or closure before the abatement expires.

Ellis County Pct. 3 commissioner Paul Perry stated he does not favor offering abatements but acknowledged Altman’s input and agreed that offering a tax abatement to a grocery store would be a poor decision.

However, Perry noted that because he voted in favor of the Midlothian data center that he would have to, out of good faith to the county voters, vote in the same manner for the Red Oak center.

“In all honesty, when we had this opportunity last year, it was hard,” Pct. 2 commissioner Lane Grayson said. ”[...] If we will take two steps backward from where we were last year, we can be nothing but satisfied. We did not pick these folks, they picked us.”

He added, “It was hard before, but it is easy today.”

The tax abatement was ultimately approved 5-0.

During an on-site presentation to media and elected officials on Jan. 14 in Midlothian, Andrew Silvestri, Google’s head of public policy and community development, Americas, stated Google had “deep roots in Texas, and they are about to get deeper.”

His comments at the time were in reference to the upped ante by Google at the Midlothian location.

“Texas has been a booming force in the tech economy,” Silvestri added during the January meeting. “Texas is a huge part of Google’s story and we are very excited for Midlothian to be the next chapter in that story.”

This year marks the 12th for Google to have a home in Texas, which also now includes a headquarters in Austin.

Silvestri also stated during the event that the “abundance of natural resources” is what attracted Google execs to the Midlothian area. He explained that Google and its team seek out locations and cities through in-house data collection and research.

“We are going to them, typically, after we identify things that are attractive to our business model,” he said in January. ”[...] Midlothian was the perfect mix of an incredible community with a talented workforce and had a willingness to work with us.”

According to a Google press release previously provided to the Daily Light, data centers “deliver key tool and resources to internet users, including search results, YouTube videos, Gmail and other apps to billions of people around the world.”

The Midlothian facility was one of four to break ground in 2019, joining Henderson, Nevada; Papillion, Nebraska; and New Albany, Ohio.

Silvestri previously acknowledged that data centers are not overly human-intensive, but do “carry a lot of computing power and are really significant and high-tech facilities.”

Silvestri added, “If you look around the country at some the communities where we have been for the last 10 years, such as in Oklahoma where we just surpassed over 500 jobs or in Iowa where we are over 400, the jobs are there. But we have been there for a long time.”

“While the job numbers might not be as high as an engineering office in Austin, we are hiring hundreds and hundreds of construction workers that are impacting local businesses, retail, hotels and housing,” Silvestri stated previously. “Our property taxes are going to continue toward schools and, as we grow, that support will continue to grow.”