Some 120 first responders, or at least 40 per day from Monday to Wednesday, underwent the training, which integrated the Rescue Task Force concept – Emergency Medical Services personnel are guarded by armed law enforcement as they enter active shooting situations to provide care to victims. 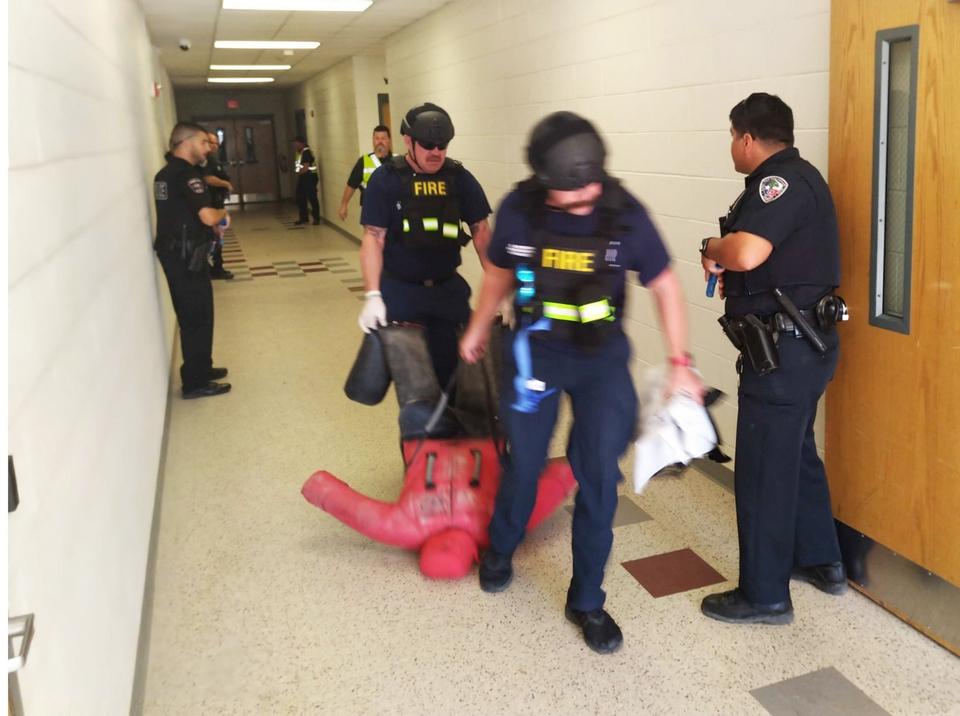 “The Red Oak Police Department started conducting this training in April of 2018 and we invite the police, fire, EMS agencies around us that are likely to respond quickly to an active shooter incident within our jurisdiction, along with any school ISD police departments within Ellis County that could benefit from the training,” Lt. Marc Schroeder said.

“The Rescue Task Force training ensures that all of the personnel that are likely to be involved in a Rescue Task Force incident can work together with common terminology and training and know what is expected from them during an active shooter incident,” Schroeder added.

The training involved classroom sessions at the Red Oak Police Department and mock drills on the grounds of the shuttered Red Oak Junior High School on Live Oak Street.

Nine patrol officers from the Glen Heights Police Department participated in the initiative.

“We selected our patrol officers to attend the training since they’re most likely going to be the first officers arriving on the scene of an active shooter situation,” Glen Heights Police Chief Vernell Dooley said. “This is important because when there’s an incident in the region that poses a significant threat to the public, everyone will come together to help. In the southwest region, we work to together to protect others.”

“This training is very beneficial to our department in learning how to provide protection for medical responders as they attempt to treat the wounded as quickly as possible,” Chief John Julin explained. “This training provides for law enforcement, fire and EMS to integrate responses during an active shooter event...”

Red Oak Police Chief Garland Wolf was the lead training instructor. He emphasized that an important aspect of the RTF concept is moving in and out of a hot zone as quickly as possible through coordinated responses.

“The type of training is crucial for our priority of saving lives by expediting the administration of life-saving protocols as rapidly as possible,” Garland pointed out. “Our goal is to provide first touch medical care within three to five minutes and transport within 15 minutes once a warm zone has been established. Firemen and EMS are provided full body armor to operate in this zone.”

“We continue to refine and hone the skill sets we hope we never need to use,” the police chief added.

“The Red Oak Police Department’s goals is to continue conducting this training on an annual basis and invite these agencies to join us to keep the curriculum fresh and provide any updates as needed,” Schroeder said.

The RTF concept was developed by the Arlington County Fire Department in Virginia in 2009 to address delays in emergency care for victims during active shooter scenarios. The Columbine High School mass shooting in Colorado in 1999 is most notably sited as an example of the effects of having first responders wait out a shooting massacre. Some victims reportedly bled to death as EMS waited outside the building. A delayed response from SWAT teams also gave the shooter more time to take more lives.