Red Oak, TX - It may not have been the 2016 Rio De Janeiro Olympic torch, which is good, because three-time Olympic shot putter, Michelle Carter will have the opportunity to light her new gift for more than one Olympiad.

Following the Red Oak HS Homecoming Parade on Friday, Oct. 7, ROHS agriculture teacher Jake Mullican, with the help of his FFA students, presented a student-built fire pit to the 2003 ROHS grad and 2016 Olympic gold medalist as a display of their gratitude for the pride she brought to the community.

Red Oak FFA Officer Team under the direction of President Caitlin Edsall approached the teachers a few short weeks ago with the idea.

“Once the students knew Ms. Carter would be one of the Grand Marshals of the parade they immediately wanted to do something to honor her and the pride and prestige she brought to Red Oak with her heroic performance in Rio this summer," Mullican said. "It worked even more to our benefit in keeping with the Olympic theme in this year's parade, because our fire pit made a great Olympic Flame."

The firepit built by the FFA students is a 36-inch fabricated wood burning fire pit.

ROHS Junior, Jarrett Ladue primarily fabricated this particular fire pit. Jarrett has been a Red Oak FFA member for three years and is one of Mullican’s “hardest working students.”

“He put in a lot of overtime creating this project. Whenever I told him that I needed him to build a fire pit for an Olympic champion, he didn't take much convincing after that,” Mullican said.

Student teacher for Jake Mullican and Waxahachie native, Chase Colwell, believes the project to have been “a great opportunity for our kids to connect with someone who has been so successful” that was in the student’s exact shoes not very long ago.

“I have so much respect for Michelle Carter for remembering her roots and being so humble in her successes,” Colwell explained. "It's the least we could do to show our appreciation of her."

Watching the students realize they’ve created something that can be used and enjoyed by others out of a pile of metal is what Mullican says he loves the most about his career. The way their face lights up makes it all worthwhile to him.

“We make several fire pits throughout the year. We have five more that we have built or are currently in the process of building including one that is being donated for the Red Oak Chamber of Commerce auction on Oct. 15. Another one will be auctioned off at Bethel UMC on Oct. 15,” Mullican shared. “On Oct. 21, Campfire Creek Therapeutic riding center will be auctioning one of our fire pits off at their Sporting Clay Shoot at Ellis County Sportsmans Club. Another fire pit will be auctioned at the Ellis County Sportsmans Club again on Oct. 29th during our ROHS Shotgun Team’s annual Spooky Shootacular event.”

“The last line of the FFA Creed by E.M. Tiffany states 'I believe that American Agriculture can and will hold true to the best traditions of our National life and that I can exert an influence in my home and community which will stand solid for my part in that inspiring task.' That is exactly what we are trying to achieve here in The Red Oak FFA,” Mullican stated. 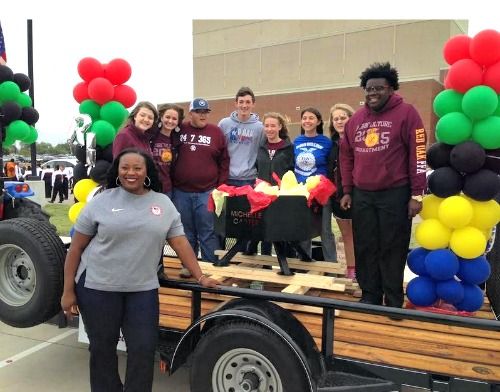