Red Oak student wins ‘I Believe in Myself’ scholarship and award

Red Oak, TX - In a national competition that combines both art and the written word, one Red Oak sixth-grader showcased her brilliance through the Academic Language Therapy Association Foundation’s “I Believe in Myself” scholarship competition

And she did so in first-place fashion.

“It was pretty amazing because I had thought about everyone else who had entered in and I didn’t know how I was going to win,” expressed Lashania Rodgers, a Red Oak Middle School student and winner of the competition. “I thought I would lose, but it was going to be fun to enter anyway.”

“I told Lashania, ‘Do you know how big this is?’ Because it wasn’t just Texas, this was national,” admired Mercedes Rodgers, Rodgers’ mother. “So think about every middle school, not just in Texas, but the United States. All the kids who entered and you won it.′ That is huge.”

Being a member of the organization, one of Rodgers’ teachers, Aly McDowell, discovered the open project and encouraged Rodgers to apply for the contest. 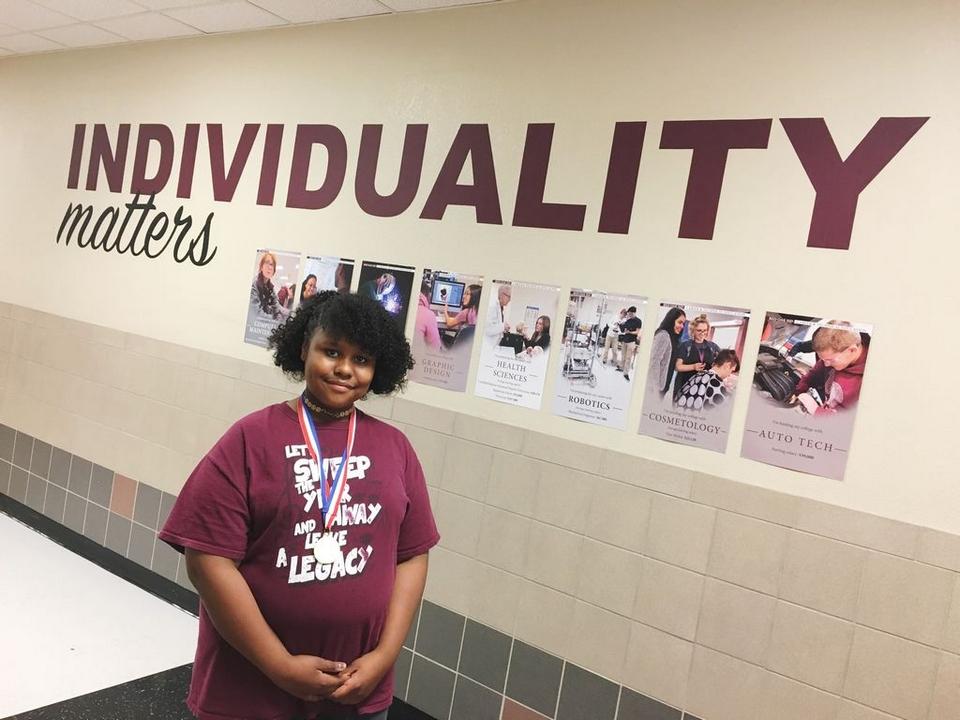 “I think that she is so creative and passionate about art. So when I saw that an art competition was coming up I went, ‘Oh! Lashania, of course, she has to enter this,’” she added.

Up for the challenge, Rodgers went on to say that she sent in her application, paired with original artwork of “an eye looking at the ocean,” and a two-page essay.

“My paper was about what art means to me. It means you can express what you’re feeling and just being really creative in what you do,” Rodgers revealed.

“And her class was awesome,” McDowell recollected the classmate support. “Because she would bring in her essay and the kids would give her different suggestions or say, ‘Oh, maybe this needs to be spelled differently.’ So they were all helping her and cheering her on throughout the entire process.”

Submitting her work in January, Rodgers received a letter from the competition’s organizers, telling her something she didn’t quite expect to read.

“Just seeing her shine, it was her moment, and it was very good,” Mrs. Rodgers grinned.

Surprised and excited, Rodgers, along with her family and McDowell, attended ALTA’s spring conference May 6.

With almost 400 attendants applauding her creativity, Rodgers accepted the award with a $250 scholarship to a summer art school of her choosing.

“It feels pretty amazing because I thought it was just going to be an award. I didn’t know that it was going to be a big national conference. She didn’t tell me,” Rodgers teased McDowell.

“She’s always so expressive and has out-of-the-box thinking to where she’s able to see the world around her from different angles,” McDowell complimented. “It’s really cool not only to see that she won, because that’s a great honor, but that she is excited enough to want to do it and have the confidence to go out there and write an essay and submit it for everyone to see was pretty awesome.”

“We are very happy and proud of her,’” Mrs. Rodgers smiled at her daughter.

As for the future of this talented student, Rodgers is off to a great start and a bright career in the arts.

“When I’m older and get a job, I want to do animation for Disney, and make a cartoon and short films in animation,” Rodgers articulated.

“But I also want to be a journalist,” she giggled.

Encouraged to pursue her passions, this Red Oak student is well on her way to making a creative impact wherever she goes.

“I think it’s just the beginning of when we can all say, ‘We knew her when,’” Mrs. Rodgers added.