Red Oak, TX - During the first Red Oak ISD Board of Trustees meeting of 2018, secondary education was a key focus in understanding trends of college-credit courses.

The district is in an evaluation period focusing on college-credit courses after scrutinizing trending data on the number of students enrolling in advanced placement and dual-credit courses.

Rachel Jones, ROISD executive director of secondary learning, discussed the two routes to college placement and advanced placement, which is exam-based as dual credit is course-work based.

Reflecting on Red Oak students participating in both AP and dual credit courses, overall both trends have decreased. Also, more students are taking dual-credit classes in comparison to AP classes.

This is something Red Oak ISD Superintendent Dr. Michael Goddard said is being further explored. He emphasized the importance of students experiencing college-level courses in high school and starting early. 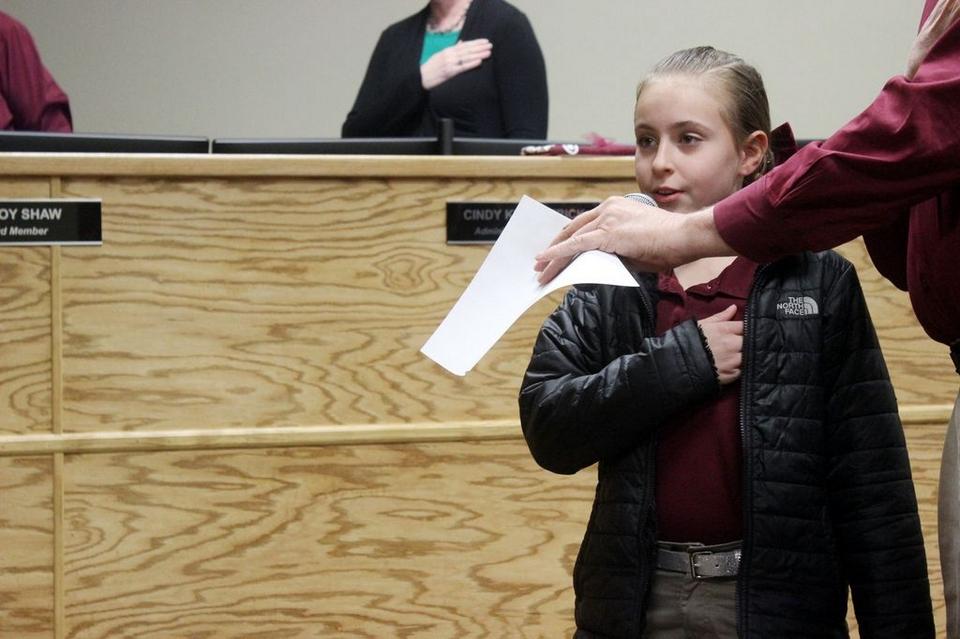 Trustee John Anderson brought up the point that some classes are looked at as pass or fail and don’t affect a student’s GPA. He said this tactic doesn’t hold students as accountable.

Goddard said the pass-or-fail-grading tactic is being looked into and teachers and students could see a change in this as soon as Fall 2018.

The Hawk Scholar Academy is one program that allows a student to graduate high school with an associate’s degree. This academy begins with an eighth-grader submitting an application. The student then enrolls in a number of dual credit classes that allow a Hawk Scholar student to graduate high school with a Navarro College associates degree. These credits will easily transfer to the University of Texas at Arlington, as well as other state universities.

The first class of Hawk Scholars will graduate in May.

In the first year of the program, 23 students applied. The following two years were each steady with 40 students applying. The deadline for the application is at the end of February. The program was reported to have a two-thirds acceptance rate.

Jones said being enrolled in the academy doesn’t guarantee a student to graduate as valedictorian, but in the 2018 graduating class, all 17 students are currently in the top 25 percent of their class. Furthermore, five of the 17 students are in the top 10 percent.

In the monthly financial report, ROISD Chief Financial Officer Vickie Benbow explained different graphs that showed what funding is going toward. Based on the report, Benbow concluded that the district is “on track.”

Shondra Jones, the principal at Donald T. Shields Elementary School, shared a staff development report. A program called “One Word” has spread through the district, which touches each point of the ROISD Four Talons.

One Word is a program that has personalized goals from teachers and staff to the students in one word. Goddard mentioned that his word last year was “renew,” which led him to Red Oak ISD. This year, his one word is rise, “so the district can go to a whole other level.”

“When the state share decreases, the local share increases. For example, the rise in local property value, that everybody has felt, does not benefit local school districts. To function, the state relies on these increases of local property taxes to cut its share, which is down 29 percent since 1987,” Goddard explained.

He said in 1987 the state paid 67 percent of the education costs and today the state only pays 38 percent. “That’s a huge thing to pay attention to as local property taxpayers make up the difference,” he said.

Goddard said he’s going to be tight and frugal with the new budget.

He added, “We are funded off our refined average daily attendance. I’ve got to have kiddos at school.”

Goddard also gave a district update saying the high school expo brought in a wide number of students and was pleased with the outcome. He also complimented the high school theatre production, “Beauty and the Beast.” Goddard said he went to all three showings and noticed the students excelled in each performance.

The district also had alumni day which Goddard said was “extremely powerful” with 50 alumni representing 15 colleges. He said after talking to the students, they shared the program was impactful.

Goddard said he’s doing a significant evaluation of the district alternative education facility and program, not only academically but also emotionally.

“What we are trying to do is set our kids up who have made a mistake know that they are not a mistake and we are really trying to teach them what it means to fail forward and be able to get back up and be successful,” Goddard explained.

He plans to get with other superintendents in Ellis County to discuss the construction of a Juvenile Justice Alternative Education Placement (JJAP) center.

On a lighter note, the district is hosting a state of the address, “Soup of the Sup” on Thursday, Jan. 25 at 6 p.m. at the Live Oak Center.

In other business, the ROISD Board of Trustees took action on:

‒ The minutes from the Dec. 18, 2017 meeting was unanimously approved.

‒ The consideration and approval of TASB local policy update 109 was presented by Tim Day, director of research and accountability. This discussed updating lingo and legal jargon. This was passed unanimously.

‒ Consideration of TEA class size waivers was presented by Kevin Freels assistant superintendent of district operations. At Eastridge Elementary, the fourth-grade classrooms are over by two students. Freels requested another waiver. This passed unanimously.

‒ Consideration and approval of TEA staff development minutes waiver was presented by Freels. This waiver allows teachers to gain 2100 minutes of staff development between the first and last day of instruction. This passed unanimously.

‒ Consideration and approval of changing the name of the Order of Election to the Trustee Election. This was approved unanimously.

‒ Consideration of joint election agreement between the ROISD and the City of Red Oak was approved unanimously.

‒ Consideration of joint election contract for election services with the County of Ellis was approved unanimously.