Waxahachie, TX - Dinah Weable knows there are women in Ellis County who are benefitting from the work done by the foundation she runs with her husband Ray.  She doesn’t know who they are, but she knows they’re there.

Weable also knows the community is making a difference in supporting the Dinah Weable Breast Cancer Survivors Foundation, so Friday she and other foundation members went on a tour to thank them.

The Dinah Weable Breast Cancer Survivors Foundation, which Dinah runs with her husband Ray Weable and other volunteers, provides money for uninsured women in the county so they can receive mammograms at no cost to them.

The couple began the foundation in 2007 after Weable attended a breast cancer survivors luncheon in Dallas. She was diagnosed with breast cancer and had surgery in 2002.

“It was amazing to see how much the support meant to the people who were there,” Weable said. “I kept raving about it.”

Soon after, Ray Weable helped organize a support luncheon through the couple’s church. The luncheon began with 35 people, but quickly grew.

“We decided to keep it going with a purpose,” Weable said. 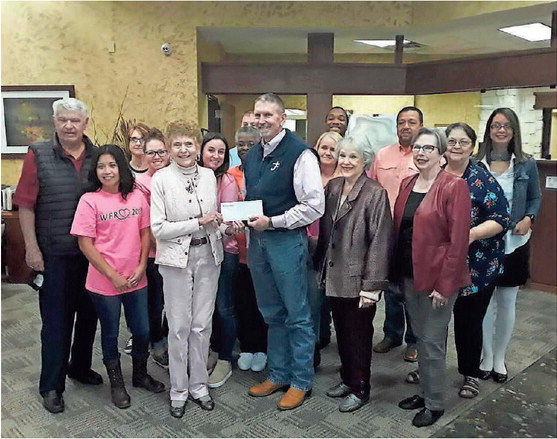 “We’re grateful for all of the support,” Weable said. “We couldn’t do this without it.”

Baylor Scott & White is one of the foundation’s largest supporters as it donated a check to the foundation Friday in the amount of $5,000.

“The Dinah Weable Breast Cancer Survivors Foundation is a wonderful tool to meet the needs of people who don’t have other ways of getting cancer screenings,” said Will Turner, president of Baylor Scott & White Medical Center Waxahachie. “We’ve seen twice the number of patients this year. A lot of them put off their screenings, so I’m glad to see them come back and help save lives.”

While the value of the program for early detection is immeasurable, the financial savings it provides is great, too.

Baylor Scott & White has supported the cause since 2007.

Foundation members also met with Nola Pearman with Pearman Oil and LP Gas Company to thank her for her $3,000 donation.

Other major donors include InterBank. Jeff Frazier, community bank president at InterBank, donates to the cause on behalf of the bank each year, and until a couple of years ago he hosted a luncheon to help raise money for the cause. Friday he was recognized for his $2,500 donation.

“I’m friends with the Weables, and they’ve been longtime customers of the bank,” Frazier said. “We’ve had some ladies in the bank go through similar struggles, and my sister has gone through it. So I’m glad to be a part of this to do what we can.”

Local attorneys Kevin and Darla Chester have been contributing for at least 10 years, Kevin said. He said the effort is close to their hearts as Darla is a breast cancer survivor, and her sister had the disease as well. The couple was recognized Friday for their $1,000 donation.

The foundation members also thanked resident Jerry Hunnicut for his quarterly donation of $350.

“He takes this personally,” Weable said. “He makes a donation every quarter.”

Another significant source of funding comes from within. Diann Wilson, longtime treasurer of the foundation, said her husband died last year, and donations were made to the foundation in his honor.

The foundation has received from several entities over the years, including the Waxahachie Fire-Rescue Department, which for years sold Tshirts to raise money for the cause.

Weable said the community continues to donate because they know the money is going to a worthy cause.

“This serves the women in our local area,” Weable said. “And that’s important to our local donors to know that the money stays right here.”

Weable also stresses that the money all goes to pay for the mammograms and that there are no administrative costs. “The only expense we have are the stamps we use for solicitation letters and thank you cards,” she said.

Weable said the foundation has helped provide between 1,400 to 1,500 mammograms since 2007, reaching its goal of funding at least 100 mammograms a year. But she expects that number may go up.

“There’s going to be a big influx now because a lot of people didn’t get them during the pandemic,” she said.

That just means more potential lives to be saved.

“There is no doubt that we have saved the life of a woman,” Weable said. “We don’t know her name, and we don’t need to know her name. But we’re providing mammograms in Waxahachie, and if something is detected then we saved a life because of it.”