Man shot after trying to buy car off Facebook Marketplace

Waxahachie, TX - A local man said he was just trying to buy a car for his son last weekend. Instead, he ended up getting shot and robbed, and he said he’s lucky to be alive.

Waxahachie police are investigating a robbery and shooting incident that occurred around 9:51 p.m. Saturday in the 1800 block of Longbranch Road, near Mid-Way Regional Airport.

Steve, who asked that his last name not be used because of concerns of his safety, said that on Saturday night he and his son met a man they had connected with through Facebook Marketplace who was selling a Tesla.

Steve said his son had been in a car crash in 2018 and is disabled, so they were looking for an autonomous vehicle his son could drive.

They found an ad on Marketplace for a Tesla. At first, it looked like a heck of a deal.

Steve said the meeting went well at first, but the mood changed quickly.

“We thought we were going to a seller’s home, but as we sat there in the long gated driveway the shooter blocked us in from behind, and the ugly events unfolded from there,” Steve said. “He held a gun to my head and insisted that we give him the money. I thought it was over as he walked away.”

Instead, Steve said, the man started firing at Steve’s car before getting in his vehicle and driving off. Police are still looking for the suspect.

“He shot eight bullets,” Steve said. “One hit me in the back.” 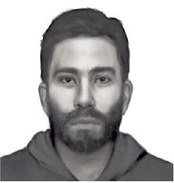 Waxahachie police released a sketch of the shooting suspect from Saturday. COURTESY OF THE WAXAHACHIE POLICE DEPARTMENT

The father and son drove away and called 911, meeting paramedics down the street on Longbranch soon after. First responders began lifesaving measures before taking Steve to a local hospital. He was released Monday.

While Steve is expected to survive, he is left with a lot of pain and a lot of questions. Like, why?

“The guy got the money,” Steve said. “Our hands

were up, we didn’t have any weapons. There was no need to shoot me.”

Another question Steve has is how did he survive? Of the eight shots that struck the vehicle, one hit his headrest.

Steve also has several concerns, including if the suspect could be doing this to someone else.

“This guy, there’s no doubt he has done this multiple times and will continue to do this,” Steve said. “He intended to kill us, and he will do this over and over until he is caught.”

Steve said he believes the suspect posts fake ads on Facebook Marketplace to lure victims and rob them.

“He was so smooth, relaxed and nonchalant about it,” Steve said. “There’s no doubt he’s done this numerous times.”

Police agree that it’s likely the suspect has done something like this before.

“We don’t have any evidence to prove that, but probably,” said Lt. Chris Dickinson of the Waxahachie Police Department.

The suspect is described as either a white or Hispanic male with brown hair and a beard. The suspect was driving a silver car that has smaller square headlights.

The investigation is active, and anyone with information, videos or photos is asked to contact Det. Elizabeth Glidewell of the Waxahachie Police Department at 469-309-4400.