Waxahachie, TX - Joe Wiser is putting the finishing touches on his new office, and the new Waxahachie police chief has made a few changes.  The desk now faces the window side of the office instead of the door. Eventually Wiser plans to utilize a standing desk. And he’s doing some painting.

But aside from his office, Wiser doesn’t have many other changes on the agenda. After all, Wiser said the department was already in a good place when he took over.

Wiser was hired as Waxahachie’s new police chief on Sept. 6 and was sworn in Sept. 30. He replaces Wade Goolsby, who retired Sept. 29 after spending seven and a half years as Waxahachie’s chief and 42 years in law enforcement.

Wiser himself has a long history of law enforcement, spending 32 years in Waxahachie in the patrol, investigations and communications divisions, as well as other ancillary roles.

Now he hopes to carry on the success Goolsby helped create.

“The beauty of what I’ve inherited here is a well-run department,” Wiser said. “Chief Goolsby’s time has been transformational. Over the last seven and a half years he worked tirelessly to get us in an excellent place.”

He said Goolsby spent a lot of time building the structure for what now exists.

“What I see now is a great opportunity to not rest on those laurels but start hanging the walls and tweak it to get it to the best it can possibly be,” Wiser said. “Take it from great to greater.”

He described Goolsby as the architect of building the great department – which included leading the effort for a new police department facility. And he said the rest of the staff played an important supporting role.

“My hope is since I was so closely akin to what he was trying to achieve that I’ll be able to further that and continue doing the things we’ve been doing over the last seven and a half years,” Wiser said. “What I want to do is invite everyone in the department to magnify their role in that. And I have no doubt that’s the path we’re going to be taking.”

Wiser said the key to taking the department to the next level will always be training.

Wiser noted the contract training provider status the department recently received from the Texas Commission on Law Enforcement (TCOLE), the state regulatory committee for all officer licensing and training. That allows WPD to provide training to not only its officers but any Texas officer, and they get TCOLE credit.

Wiser said approximately 90 percent of the training WPD provides is free. He said it draws in agencies from all over Texas.

“We’re finding that nothing quite expands an organization’s reputation like a good training program,” he said, adding that WPD has gained notoriety for providing quality training.

“That program has far exceeded what our hopes were,” he said. “This corridor south of Dallas County had been somewhat neglected for that, so geographically we’re in an excellent place.”

Nothing stresses the need for appropriate training like the mass shooting last May in Uvalde.

Wiser said it’s now up to WPD and other law enforcement agencies across the country to learn from that incident and be prepared.

“We gleamed a lot of information from Uvalde about some shortcomings,” Wiser said. “For all law enforcement agencies that’s not Uvalde the lesson learned is to take a hard look at that and see where we might be coming up short. In the world we live in today law enforcement has to look at it as we’re going to have an active shooter. We have to approach it like that’s likely to happen, so we have to train accordingly.”

Wiser said for him that type of training will be priority one.

“Whether it’s the first responding police officer or the school resource officer or a combination of both they are most likely going to be our absolute best chance to stop that kind of activity and stop it quickly,” Wiser said, “which is what we didn’t see in Uvalde. I think all law enforcement has its marching orders that should be priority one. And in order to help those officers increase their chances of being successful we have to give them the necessary tools and equipment, we have to give them the necessary training, and we have to help them with their mindset to let them know what the level of expectation is for those kinds of calls. As a whole you’d have to say when that shooting is going on you have to act, and you have to act quick to stop it. And that’s what we’ll be focusing on.”

Wiser said he is pleased with what he’s seen from the training Waxahachie officers have gone through.

“We’re in an excellent place due to the training that they’re receiving, most of which is coming from our own people,” Wiser said. “But it’s never enough. We’re going to continue to do that.”

He said officers have taken “hasty reacting” training where they learn things they can do quickly in active shooter situations. Wiser said the skills officers learn from that can be applied in other situations, too.

“Those things can change minute to minute,” Wiser said. “And we’re exposing them to that training and putting them in those scenarios. And our officers are responding and doing a wonderful job.”

In many cases a city that experiences population growth can also be expected to see an increase in crime. But Wiser said Waxahachie hasn’t followed that trend.

According to statistics released by the department earlier this year, property crime was down in 2021 from 2020, though violent crime was up. Overall crime was flat from 2020 and slightly up from 2019.

“We’ve seen the growth, but we have not seen the rise in crime like you might would think would happen with that growth,” Wiser said. “I think the challenge will continuously be to keep those numbers where they’re at along with that growth.”

Wiser said one way to keep the city safe in the face of growth is to provide the officers with what they need to be successful.

“Waxahachie as a whole has a tremendous desire to embrace the growth but not at the cost of losing that hometown feeling,” Wiser said. “Arguably Waxahachie does that better than any city I’m aware of. I would like to see the Waxahachie Police Department do everything it can to foster that kind of approach. If we can somehow maintain the small-town feel and embrace the growth that’s inevitable then I think it’s a win-win.”

WPD and the community

Wiser said the community programs the department has had in place will continue under his leadership.

Among those are the Halloween candy giveaway, Shop with a Cop and Coffee with a Cop, as well as Chat with a Chief, which he said should return by the end of the year or early next year.

“That’s when I’ll give the state of the department,” Wiser said. “But I’ll do more listening and less talking.”

There will also be a Cops with Kids Picnic that includes free food, bounce houses, vendors and a bicycle giveaway. 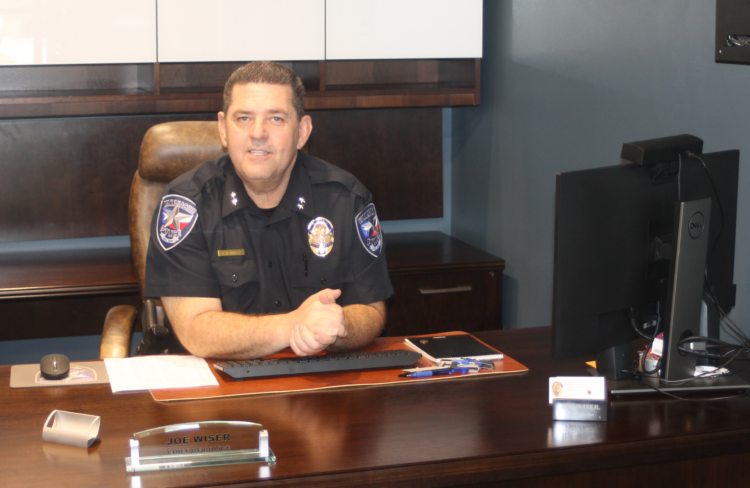 Wiser said the police department has a good relationship with the community, and he wants to make sure that continues.

“Well over 30 years in law enforcement I have always witnessed tremendous support from the citizens of Waxahachie,” Wiser said. “None more so than the last two years. It would appear to me that the citizens here feel compelled to show their support in bigger ways because of the national narrative.

“It’s not uncommon for four or five people to come up to our table and say, “thank you for what you do,’” he said.

Soon there may be way to connect the police department with the community even more.

Wiser said the department is exploring some outside applications, including one that interfaces with the department’s current records management system. He said that could allow law enforcement to text residents when they call dispatch.

He said residents could opt out of the program. Those who join can receive real-time information from the police department via text after their initial call about things such as when an officer will arrive and other information related to their call. Depending on the call the resident can also provide feedback about the officers’ response via text.

“What we inevitably find when we ask citizens how we’re doing is that they rate us at the top,” Wiser said. “And they say over and over again we’re doing all we can do. We’re not going to stop there. There’s always more we can do.”

Wiser said he’s also optimistic about the direction of the Animal Services Division, which the police department oversees.

Wiser pointed to the new personnel, including Animal Services Manager Cathy Le, and new procedures that have been put in place that have improved the department.

“The number of community outreaches that we’re doing with the hopes of getting these animals adopted or fostered is increasing tremendously,” Wiser said. “And we’re only going to increase that.”

Wiser said that early in his career he had a desire to become a police chief, but there was a time when he had moved past that. Toward the end of his career the passion came back. He needs only to look at his coworkers to see why.

“It’s all about the desire to serve the people that I’m working alongside,” Wiser said.

Wiser recalled an exercise at a leadership training when everyone was asked one thing they’ve learned in their career.

“When you become a supervisor most people feel like, ‘I’m going to change the world overnight,’” Wiser said. “When you’re a supervisor people are involved. Sad to say there comes a time in your journey when you say, ‘If it weren’t for the people my life would be so much easier.’ If you’re fortunate it comes full circle, and eventually you realize if not for the people you wouldn’t be needed. And if not for the people I wouldn’t want to do this job. That’s the thing that makes me want to come in every day.”