Waxahachie, TX - Four people have been arrested in connection to a Waxahachie gun store burglary.  The Waxahachie Police Department, the Bureau of Alcohol, Tobacco and Firearms (ATF)

and the Dallas Police Department made four arrests in connect with the burglary that took place at the Shooter’s Edge gun Store on July 10. The store is located in the 1000 block of W. U.S. Highway 77 in Waxahachie.

While arrests have been made in the case, the investigation is still on going at this time.

Xavier Kirvin, 19, of Dallas on July 15 was arrested by ATF, Waxahachie and Dallas police officers after leaving a residence in Dallas. He was booked into the Wayne McCollum Detention Center and is charged with engaging in organized criminal activity.

Devon Deontae Jennings, 17, of Dallas, was taken into custody on July 19 at his residence on Kirnwood Drive in Dallas by ATF, Waxahachie and Dallas police officers. Jennings is charged with engaging in organized criminal activity.

According to a previous article, 17 guns were stolen from Shooter’s Edge, which is owned by former Waxahachie police chief Chuck Edge. Waxahachie Police Lt. Todd Woodruff said three handguns stolen during the offense have been recovered during this investigation.

“The suspects used a stolen red Ford F250 truck to ram a hole in an exterior wall. The suspects quickly entered and stole several firearms, then left the scene in a white Ford dual cab pickup. We believe there were about seven suspects involved. Some of the suspects wore masks,” stated Waxahachie Police Lt. Todd Woodruff, head of the department’s criminal investigation unit, via email in a previous article “The red truck was left near the scene and it was gone over today (Sunday) by an Ellis County Sheriff’s Physical Evidence technician.”

Preliminary information indicates 12 handguns, three AR style high-powered rifles, one AK-style high power rifle and one shotgun were reported as stolen, according to an ATF press release. No cash was taken.

According to a press release from the ATF, initial investigation revealed the suspects utilized a stolen pickup truck from Mesquite, which Woodruff was quick to point out that he did not know whether the incident was connected to the shooting of Dallas and DART police officers days before the robbery. The truck was described as a red Ford F-250 with an extended crew cab. The red Ford F-250 has been recovered by the Waxahachie Police Department.

Of the seven teenage males that entered the store, some were wearing masks. At least one was a white male, and another was a heavy set black male with short dreadlocks, the ATF press release stated.

Anyone with information can contact the police department at 469-309-4400 or the Ellis County Crime Stoppers organization at 972-937-PAYS. Callers can remain anonymous. The Waxahachie Police Department is located in downtown Waxahachie at 216 N. College St. People can also call the ATF hotline at 1-888-283-8477. All calls made to the ATF will be kept confidential. 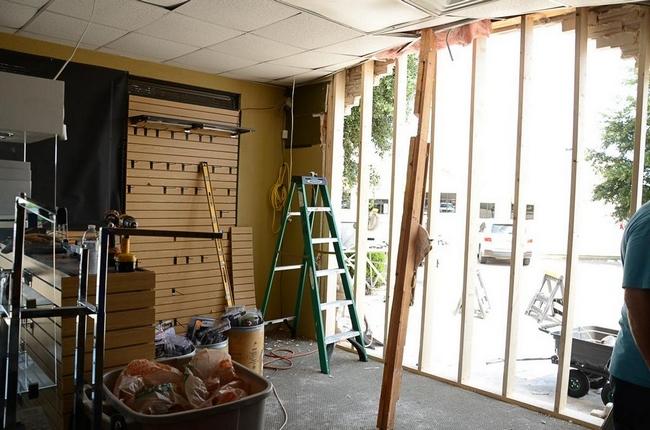