SACRAMENTO, California - An agent from the Bureau of Alcohol, Tobacco, Firearms and Explosives and a detective from the Waxahachie Police Department took in a suspect Tuesday

believed to be in connection with the burglary of Shooter’s Edge gun store on July 10.

“He (McCoy) was being held in Stockton, CA on an outstanding warrant that Waxahachie Police detectives had requested for this offense. We’d initially tracked him to Las Vegas. Subsequently, we developed intel that he had left Vegas and went to Stockton,” Woodruff said. “United States Marshals were able to locate him in Stockton and arrested him late last week. He was interviewed last night by our detectives and booked into Wayne McCollum Detention Center on charges of Engaging in Organized Criminal Activity and Theft of a Firearm.”

According to a previous WDL article, 17 guns were stolen from Shooter’s Edge, owned by former Waxahachie Police Chief Chuck Edge. Only three of the handguns stolen during the heist have been recovered thus far in the investigation, Woodruff previously said. No additional guns were recovered from this most recent arrest.

“The suspects used a stolen red Ford F250 truck to ram a hole in an exterior wall. The suspects quickly entered and stole several firearms, then left the scene in a white Ford dual cab pickup. We believe there were about seven suspects involved. Some of the suspects wore masks,” stated Woodruff, who is head of the department’s criminal investigation unit. “The red truck was left near the scene, and it was gone over [July 10] by an Ellis County Sheriff’s Physical Evidence technician.”

No cash was taken, according to an ATF press release.

According to a press release from the ATF, the initial investigation revealed the suspects utilized a stolen pickup truck from Mesquite.

The Waxahachie Police Department has since recovered the red Ford F-250.

At least one of the suspects was a white male, and another was a heavy-set black male with short dreadlocks, the original ATF press release stated.

Before the most recent arrests, six other suspects had been detained in the case.

Dallas Police arrested Dallas resident, Deauntre Dominique Jones, 17, and a 16-year-old juvenile on July 26. Both charged with engaging in organized criminal activity for the burglary

Xavier Kirvin, 19, of Dallas, was arrested July 15 by ATF, Waxahachie and Dallas police officers after leaving a residence in Dallas and has been charged with engaging in an organized criminal activity.

Dallas Police then arrested two 17-year-old suspects on July 18 – Ardell Virgillo Cherry and Demarcus Dillard. Cherry and Dillard, both of Dallas, have also been charged with engaging in an organized criminal activity.

ATF and the Waxahachie and Dallas police officers took Devon Deontae Jennings, 17, into custody on July 19 at his Dallas residence on Kirnwood Drive. Jennings has since been charged with engaging in an organized criminal activity.

Woodruff said the BATF and the Dallas Police continue to assist Waxahachie Police with the investigation. As of press time McCoy remains in custody at the detention center with bonds totaling $200,000

Anyone with information can contact the police department at 469-309-4400 or the Ellis County Crime Stoppers organization at 972-937-PAYS. Callers can remain anonymous. The Waxahachie Police Department is located in downtown Waxahachie at 216 N. College St. People can also call the ATF hotline at 1-888-283-8477. All calls made to the ATF will be kept confidential. 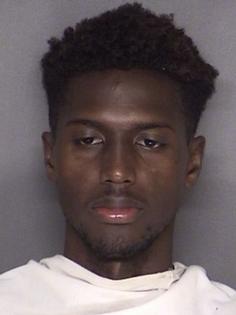