Waxahachie, TX - Teamwork and trust were the tools that Waxahachie Firefighters and medical personnel from American Medical Response used to save a man’s life in December. A few months later, those efforts were recognized with a commendation.

On Dec. 28, 2017, Emergency crews responded to a report of a man choking at a residence on Elder Street. Crews were dispatched at 6:30 p.m.

Firefighter Ed Konick relayed that when he entered the home, he found an extremely chaotic scene with a lot of activity taking place all at once. He then spotted the patient who was on the floor and appeared to be lifeless.

“I got behind him and picked him up and try to do one of those abdominal thrusts. He was just limp. I said, ‘this is not going to work.’ I put him back down on the ground and started (again) doing abdominal thrusts,” Konick said. “I grabbed his mouth like you would a fish, pulled his jaw, and you could see junk in there. He was not breathing or nothing.”

Konick recalled that Firefighter Chris Wilkes was stationed at the patient’s head and found the obstruction in the airway, which was several large pieces of chicken. Using Magill forceps, which is a tool similar to tweezers, they were able to remove the food safely. When two large scoops of food were removed, the patient began breathing again. Every 20 to 30 seconds the patient would take larger breaths of air.

“To go from not breathing to a big gasp once you pull it out it was kind of like an ‘oh wow moment,’” Wilkes said. “Of course we had him on the monitor and everything and saw his stats start to improve.” 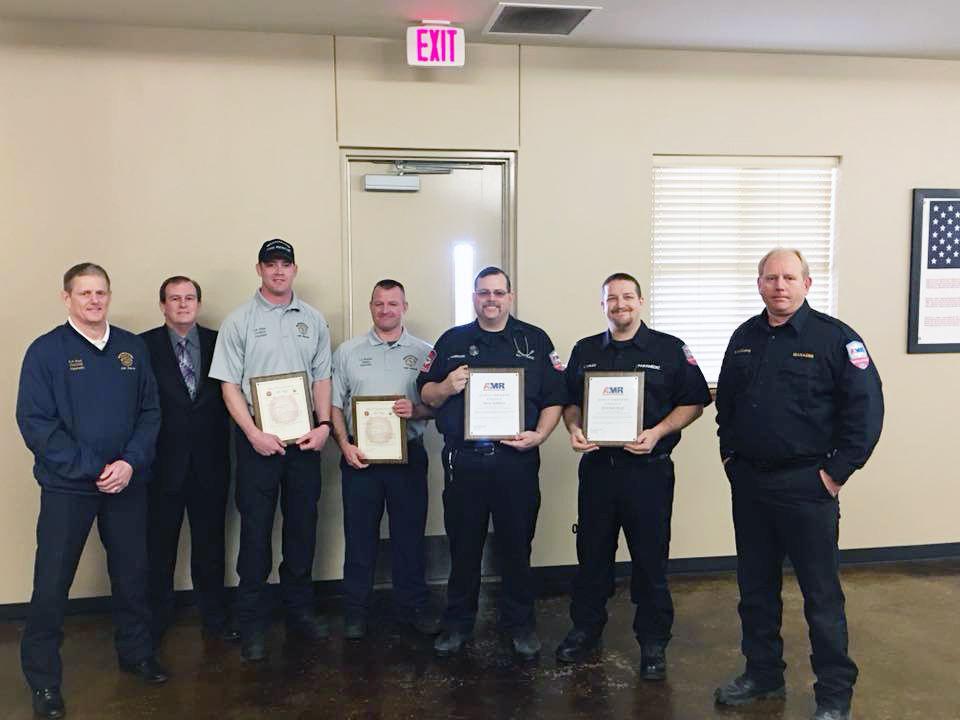 The medical team from AMR, comprised of Jonathan Miles and Mark Hammond, worked alongside the firefighters. The two provided medical care, checked vitals, and then transported the patient to Baylor Scott and White Medical Center —Waxahachie.

While en route to the hospital the decision to intubate the patient was carefully weighed. This would involve putting a plastic tube down the trachea, which allows certain drugs to be administered. It also causes medical personnel to assist the patient in breathing.

“We started watching his oxygen saturation (levels) in the back of the ambulance and his saturations are like 60, which is really low. We try to keep in the 90s but if it gets less than that we are thinking about intubating somebody,” Konick recalled. “That is in the back of our mind and then his saturations would go up and started improving by us giving him oxygen and bagging for him. Then they would go down, and then they would go up.”

He noted that since the ambulance was a few minutes away from the hospital, the team decided to see what the attending doctor would recommend.

Captain Candon Birdwell noted the worry was that if the crew intubated that any remaining particles from the chicken could possibly be pushed down into the lungs causing additional problems. The larger, life-threating particles were removed before arriving at the hospital. Hospital staff removed the remaining particles, and the patient was able to make a full recovery.

Birdwell praised the actions taken both by firefighters and the crew from AMR, which created the best outcome possible that aided in patient’s recovery. He shared that the communication between both groups on each call is valuable.

“I have never had a better crew and never been concerned about medical treatment wise. They basically do it, and it gets done right,” Birdwell expressed. “This crew from AMR is a fairly consistent crew with Mark and Miles and are very good crew. Mark and Miles trust us. They know our capabilities, and we have the trust with them.”

Wilkes stated that it is an honor for the group to be recognized for the call. He noted that he learns something each day that he can apply to the next call.

“I love the crew that I work with. They are great guys and teach me something every shift,” Wilkes emphasized. “Since I have been hired I have been grateful to be apart of something bigger than myself. It is a reminder that just how precious life is and not to take it the small things for granted.”

Wilkes shared that this was a team effort and everyone played an important role in the call. He noted that if someone does not have the knowledge about one item another person does, which helps to create a team that works well together.

Konick stated the being recognized is humbling but tributes it to the training and experience he has received over the years as a first responder.

“You know my first thought is well man I am just doing our job,” Konick noted. “To get recognized is cool. It makes you think wow someone is really paying attention.”

He added all the people at the fire department and with AMR have that same level of dedication each day that they are on the job, which translates into providing great care for the people they serve.