Waxahachie, TX - Jails are considered by some as a cold place of correction where inmates await trial or serve short sentences for offenses they have committed.  Despite its outward appearance, the Wayne McCollum Detention Center provides inmate programs

and services that can lead them to a positive path on the outside.

For instance, take Joe Ledesma, who had been at the detention center since May 2017 until he was transferred earlier this month to a state facility. Ledesma considers himself to be a fortunate person to have been selected to take part in the center’s trustee program because of the man he used to be on the outside.

“What was I like out in the world? Really being on drugs I was not really as helpful as I am now. It has changed a lot in my personality being here and all. It has helped me a lot,” Ledesma said. “I know that a lot of people don’t like being here in jail. It is actually a good place to be at when you are going downhill.”

For the past four months, Ledesma’s job as a trustee was one of a bootblack. Officers come in with scuffed up boots and leave when they have a mirror shine. To be considered for a trustee position inmates have good behavior and in for a non-violent misdemeanor offense. Inmates who are a part of this program are awaiting sentencing or transfer to another facility. They are assigned jobs inside the facility such as working in the kitchen, laundry, and facility maintenance. The staff at the detention center makes the final decision whether or not an inmate can serve in this role.

Ledesma explained while the job might be small the responsibility that goes along with it is what matters to him.

“I have been doing drugs since I was 14 years old. At the age of 26, I was incarcerated here. That really changed my mind and my whole perspective on life. After that it was more, I knew I had to change,” Ledesma shared. “This time I am here not because I am going backward, my past was catching up with me. I was on probation. Probation and child support I had both of them together. It was like a head-on collision really. I didn’t pay child support for so many years.” 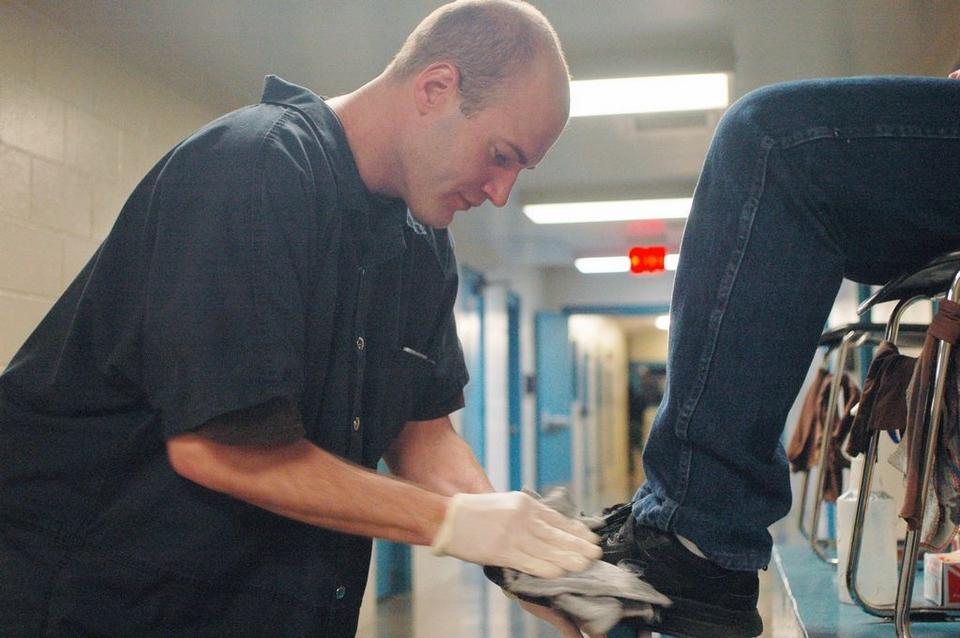 Ledesma continued, stating while in jail it has given him the chance to straighten things out and live a sober life.

As a trustee, which is a position he applied for, Ledesma has seen people come and go, but he has been able to get things in his in order. He remarked that it has been a while to have even a little bit of trust.

“Being on drugs and stuff you tend to lose a lot of trusts. Out there in the world, you don’t think that you lose trust, but you do. People lose trust and love for you because you are doing the things that you are doing,” Ledesma remembered. “Losing trust and love that is a lot. Now during my visits people can see, even through a screen, that they are seeing me happier and outgoing. They can see it my eyes that I am whole as a person.”

Ledesma time as a trustee has helped not only the time pass quicker by having something to do, but it has provided an outlet to speak with people about the issues he is facing and find a positive solution.

For Mitchell Anderson, incarceration was not a lifestyle change that he expected to make. He first served as a trustee and later as a member of the Sheriff’s Alternative Prisoner Program. That has helped to keep him focused on a future outside of jail. On the outside, Anderson runs his own business, which his wife is managing during his incarceration.

“From the day that I stepped foot in jail, I became a trustee 10 minutes after I got back from court. I have done everything from sanitation as far as cleaning the jail to mechanic [work], repairing deputies’ vehicles,” Anderson stated. “Right now I am on the SAPP crew who randomly fixes things around the jail and anything that goes down (like) tractors. I work on tractors a lot, brush hogs, and stuff like that.”

Inmates who are a part of the SAPP crew are non-violent offenders; have to be sentenced, and serving time on a misdemeanor offense. They work outside of the facility under the supervision of a detention officer to perform such tasks like landscaping. The final decision to be a part of this program is determined by the staff at the detention center. Each case is judged on its own merits.

Anderson stated that being involved helps the time pass by quickly taking your mind off the outside world where you have family members waiting for you. He shared that being in jail put things in perspective.

“Well you know I have never had any experience like this before. You can’t really expect this. You can watch all of the television and shows you want to. Until your actually living in here, it really does not hit you for the first couple of weeks,” Anderson stated. “For people that have not been here before it is a slap in the face. You see multiple offenders in here coming in and out (even) during the time that I have been here. A lot of people don’t have the common sense or the knowledge to stay out of trouble when they get out of here. They will leave within a few days, but they don’t take advantage of what gift they have been given, freedom.”

Anderson pointed out that being a part of this program makes a person still feel like that they are needed giving them work to focus their talents and abilities on. As a member of the SAPP crew, Anderson has seen how it has made a positive difference in others lives.

“Being on the SAPP crew it can definitely change you around quickly. They come into the jail with a negative attitude and then become a trustee and still have the negative attitude at first,” Anderson remembered. “As soon as they got on the SAPP crew right off the bat they started turning themselves around and started acting more pleasant. It definitely lifts spirits.”

Anderson added everyone makes mistakes in their lives. Everyone is here is here for different reasons, but there are staff members that look beyond the number an inmate is given and sees the person inside. This type of treatment helps, he recalled.

The detention center makes counseling services as well as a chaplain, who tends to the spiritual and emotional needs of inmates available. This provides a valuable outlet where problems and concerns can be handled properly.

Nelissa Trevina has been sentenced to 17 years in a federal facility and is awaiting transfer. Talking with someone has allowed her to figure out what she wants to do with her life, helped her to make better choices, and leave old destructive habits in the past.

After her sentencing in April of 2016 and spending 30 days in confinement for fighting Trevina came to a turning point. She began opening up about her life and the choices that sent her to jail.

“It has helped a lot. I am able to work with myself. I plan to keep my head up and not let it get to me,” Trevina said. “I have got kids out there, and sometimes you need to change those ways going forward to better yourself. It is not all about being angry and fighting. He (the councilor) helps you to make yourself calm. It is really good therapy.”

Trevina stated driving her anger over the years was connected to her father who was not in her life for 10 years. By talking and opening up about her feelings with the counselor has helped her to forgive and forget.

“He helped a lot with that. You have just got to forgive and keep on moving,” Trevina said. “You can’t hold a grudge against people for that long.”

Detention Officer Conrad Dalquest shared that he has seen the difference these programs have made in the lives of people he watches over. In almost 10 years on the job he has seen individuals come in with their heads hung down and leave with their heads back up again because of the help they received.

“I was filling up with gas at H-E-B the other day and some starts person yelling ‘Mr. D, Mr. D’ and here comes an ex-inmate. He is running across the parking lot to shake my hand,” Dalquest said. “He tells me that he has a job, that he is reunited with his wife, and he has got his family back which though he lost forever and ever. Those are kind of the things that want to make you come back.”

While Daquest’s job is one of supervision, correction, and order, he looks to make a positive difference in the lives of these individuals. He notes that it is not about the big steps but smaller ones that are taken gradually over time that have the lasting impact.

“I am looking for miracles every day. It does make a difference with me by smiling at somebody, saying hi to them, speaking to them or giving them a good word. These people are human beings like you, and I are,” Daquest explained. “The only thing that I can do is be a positive force in their lives while they are here. Then hopefully and prayerfully they will take that energy back out into society and interact with people in a proper way.”