Waxahachie, TX - An interurban freight car that dates back over one century will soon undergo a much-needed renovation before being donated to the City of Waxahachie. The project, headed and funded by Historic Waxahachie Inc, will allow for the train car to be viewed by the public after its restoration.

“To the best of our knowledge, especially in this area, no one has a freight car,” explained David Hudgins, a member of Historic Waxahachie, Inc. “The only ones that are exhibited are passenger cars. So that makes it unique in its own light.”

The 25-ton freighter was hauled to Waxahachie from Palmer on Wednesday, March 21. Vice President of Historic Waxahachie, Inc. Greg Nehib said the transport cost double of the cost of the rail car itself.

Hudgins initially came across the freighter six years ago and would offer to purchase it from the family every Christmas.

“I’ve been after them to buy it, and they didn’t want to sell it,” Hudgins elaborated. “There was a barn built over it, and they were using it as a shed. The barn started to collapse on it, and if it wouldn’t have been saved, it was going to be too late.”

Members of Historic Waxahachie, Inc. plan to restore the railcar to its authentic style. Nehib estimated a year’s time to remodel it. Once the freight is finished and donated to the city, it will reside near the new amphitheater.

Historic Waxahachie, Inc. is weighing the option of opening one side of the car to show the inside through Plexiglas. Members also want to build a loading platform adjacent to the car so patrons can walk up and view it from the same perspective others did over 100 years ago.

While Nehib pointed at the top of the freight, he described how it functioned. “Now what this had was a whip on each end and then you had a power line going down the middle of the track, that was the source of power for the car.” 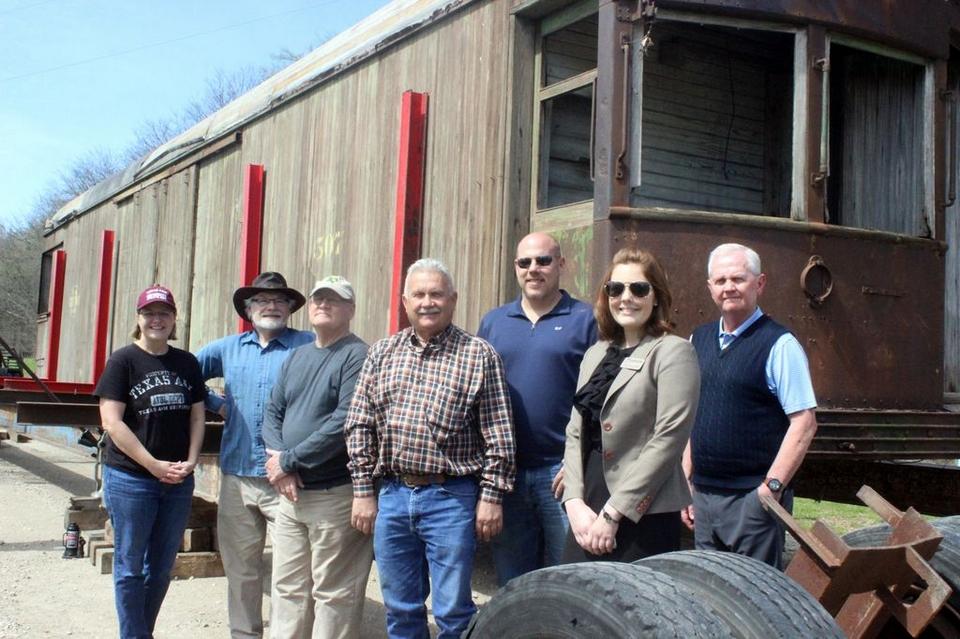 The interurban freight has two different symbols painted on the outside in yellow, “507” and “Texas Electric Railway.” Hudgins said the company name is iconic to Waxahachie.

“The person that was the owner when they first launched business was a Waxahachie resident, Mr. Strickland. He was also the president of Texas Power and Light [and Southern Traction Co.]. So he already had the power company in Dallas. Whenever this was being built, he bought it because it was an electric railway and he had the electric company,” Nehib recalled.

The interurban railcar system once worked in Waxahachie and surrounding cities. Folks would ride the cars around town and haul bulky items; the only other resource people had were horses and wagons. The interurban rail station still stands in downtown Waxahachie between College Street Pub and The Rogers Hotel.

The first electric car on the new line reached downtown Waxahachie on Aug. 30, 1912. The line ran from Dallas to Waxahachie, onto Waco.

The railcar that’s constructed with 90 percent wood started working in 1917 and retired in 1948. There are several photos of the 507 interurban railcar in the area, but members of Historic Waxahachie, Inc. have not located any photos of the car in town. Hudgins does believe the freight made its way through Waxahachie during its prime.

“We do believe — there’s a picture of this car at Sterrett, between here and Red Oak. The end of the line was Waco, for this line. But if it was there then more than likely it did come through here,” Hudgins explained.

Once the railcar traveled to Waxahachie, visitors and other members of Historic Waxahachie, Inc. sized up the valuable find and expressed how it is in better condition than what they expected.

“This is something Historic Waxahachie is donating to the city. This is our contribution,” Nehib emphasized.

More information on the 507 interurban freight car can be found at the Ellis County Museum, located at 201 S. College St.