Waxahachie, TX - Residents now have an opportunity to represent Waxahachie with a new landscape of crape myrtles and free Chick-fil-A.  The Greenery and Chick-fil-A in Waxahachie partnered in a promotion to beautify and feed the town.

Once the two trees are planted, the planter can take a photo of the landscape and then take that photo with their Greenery receipt to the Chick-fil-A in Waxahachie to receive a package of four free meals. 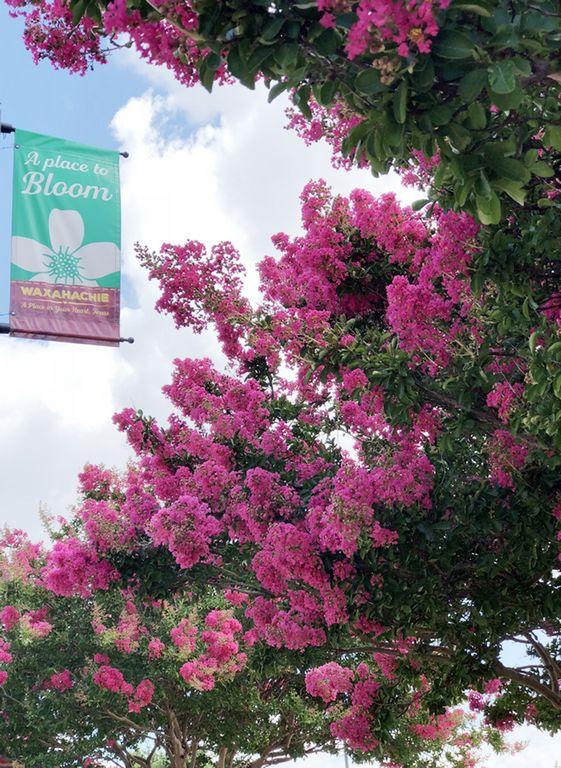 Laure Henthorn, marketing director for Chick-fil-a in Waxahachie, said the passion of the community for the title of “Crape Myrtle Capital of Texas” influenced the bargain.

“Through some of the meeting I’ve been to I know that there is an emphasis for new businesses planting crape myrtles and I wanted to include that on the resident level,” Henthron explained.

There is a limit of two promotions per person.

Henthorn said about 20 gift packages have been given away and there are plenty more.

Scott and Debra Green, owners of The Greenery, were unable to comment due to a mission trip to New Mexico.

Chick-fil-A is also one of the sponsors for this year’s Crape Myrtle Festival and will join the parade while the cow and concessions will play a part at the Waxahachie Sports Complex on July 3 and Getzendaner Park on July Fourth.

Bonnie Ramsey expressed her thoughts for the community and the title of the crape myrtle capital of Texas to Henthorn, and Ramsey’s expression influenced her to promote that message.

“With Chick-fil-A, we wanted to be part of bringing this to the forefront and promote this in our community,” Henthorn expressed.

In 1997, the Texas State Legislature designated Waxahachie as the “Crape Myrtle Capital of Texas.” Each summer, the city’s historic streets are lined with hundreds of colorful crape myrtles in full bloom.

The City of Waxahachie will celebrate the honor of Crape Myrtle Capital of Texas on July 3 and 4. The 21st annual festival and parade is themed “Pink Petals and Patriotism.”

The celebration begins with a tailgate party at the Waxahachie Sports Complex, located at 151 Broadhead Rd. Madness Entertainment will perform the crowd before the concert and teach moves of the latest dance craze songs.

The Dallas-Ft. Worth band, Premier Motown Band will jam to Memphis soul music at 7:30 p.m. Following the concert, HEB will launch a fireworks display t 9:15 p.m. Spectators are encouraged to tune into KBEC 1390 during the show for a special broadcast of patriotic music.

A kid zone will also be sponsored with free activities. There will also be a variety of food vendors in the food court that includes a few new selections.

“Lawn chairs, blankets, coolers are allowed at the Waxahachie Sports Complex; however, personal fireworks are prohibited,” according to a City of Waxahachie press release.

On July 4, the celebration will continue at 10 a.m. with a hometown parade sponsored by Citizens National Bank of Texas. The parade will begin at College Street, head west on Main Street and end in Getzendaner Park.

Remedy Church will host a free picnic at the park for families along with free hot dogs, water, snow cones, old-fashioned games and bounce houses. A “Wiffle Ball Home Run Derby” will occur during the picnic, too.

Bryan Wooten a pastor with Remedy Church said, “The Wiffle ball tournament has really taken off the past few years.”

The tournament is broken into kids, teams and adult divisions. First, second and third place gift cards will be handed out from Academy, ShowBiz, and Chick-fil-A.

The Crape Myrtle Festival and Parade are free to the public.

For more information on the festival, call the Waxahachie Convention and Visitors Bureau at 469-309-4040 or visit www.waxahachiecvb.com.