Waxahachie, TX - Waxahachie Police and Firefighters are taking public safety to a new altitude, as each department is working to incorporate the use of a drone into its operations.

Waxahachie Police officer David Bittle stated drones were initially brought into law enforcement to help document accidents and outside crime scenes, which are spread out over a large area. 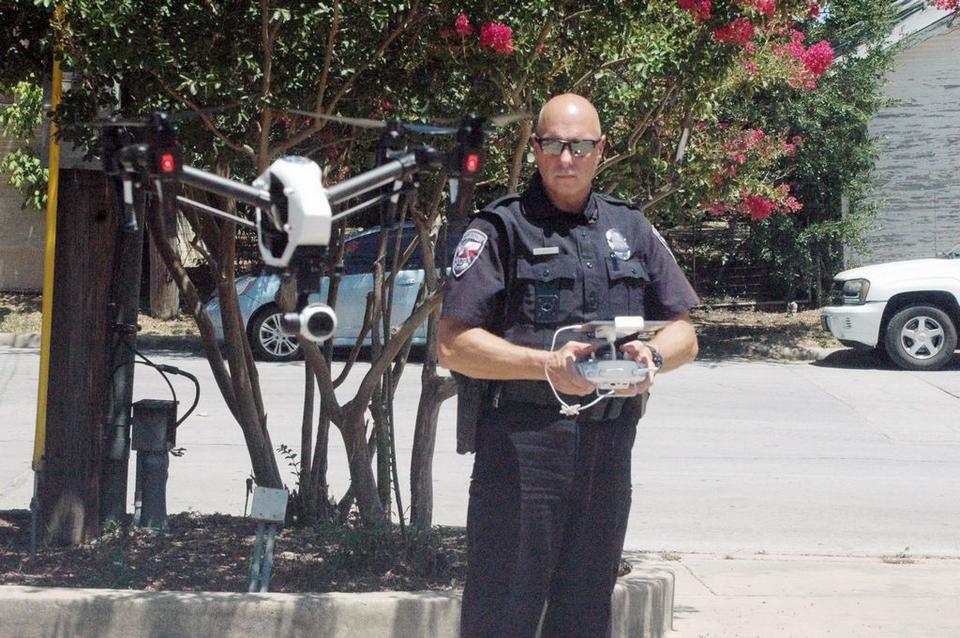 “We can map those in a fraction of a time without shutting down the road with the drone and some software,” Bittle said. “If we shut down the road and put up the total (mapping) stations that could take a could of hours to get a few hundred points to put on a map with a software system.”

Bittle stated the drone can fly a programmed route and take the pictures needed to create a three-dimensional map of the area within minutes. However, creating 3D maps is just one way the police department uses the drone to aid in its mission of serving the public.

“The reason why we picked this model, DJI Inspire One, is the cameras are interchangeable. You can remove the camera from this one and put on a zoom camera or a thermal camera,” Bittle said. “If you need to search for somebody at night you can use the thermal camera for the heat signature.”

According to the DJI website, the Inspire One has an aerodynamic design that provides the operator with an unobstructed view and can be ready to fly within minutes. The drone has four batteries, each with a flight time of 17-20 minutes. It can operate at 400 feet above the ground or 400 feet above an obstacle or building.

Bittle, who is a licensed private pilot and drone pilot, is training staff at the department to become licensed through the Federal Aviation Administration to pilot the aircraft. The goal is to have the corporals on each shift certified to operate of the drone. The drone will be in the corporal’s patrol vehicle for rapid deployment. While on a call the drone pilot and the visual observer work together. The visual observer looks out for other aircraft, power lines, trees limbs, and birds.

The department has already deployed the drone on a few calls, all with Bittle at the controls. One call was an eight-hour standoff between police and a barricaded suspect at the Oxford apartments at Crossroad Center in February in the 400 block of Alliance Boulevard. The drone was used to look into the windows of the apartment during the call. 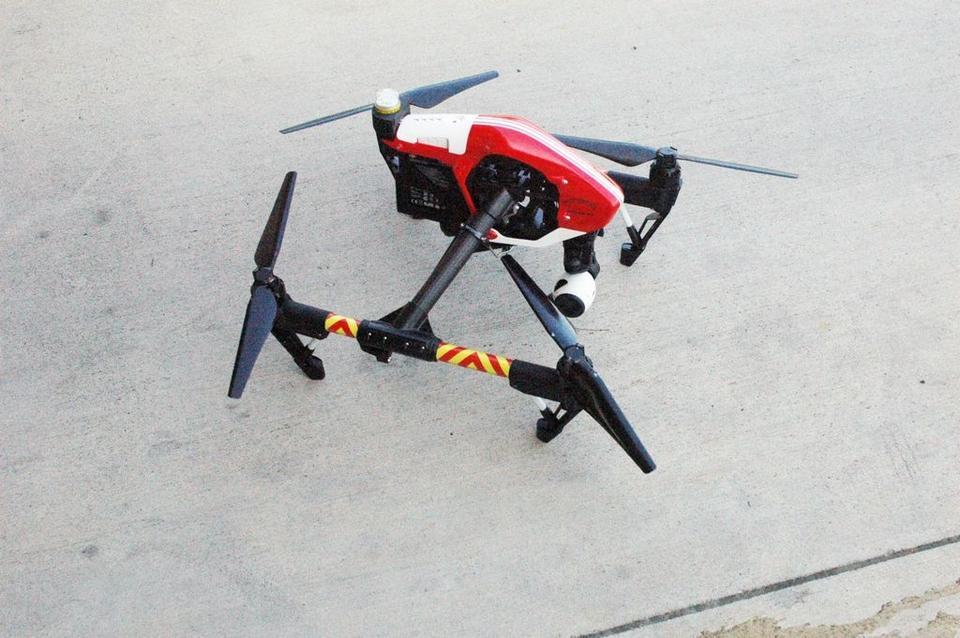 “The drone will for sure change the way we attack and position ourselves,” Konick said. It will affect how we manage a scene when it is in use.”

Firefighter Ed Konick shared Bittle’s thoughts about the capabilities a drone can bring to an emergency call.

“Drones are becoming more prevalent because technology is becoming more available. It is an awesome tool to have in the toolbox for any kind of incident,” Konick said. “If you have a swift water rescue and you can’t see where that person is you can take the drone down the river or creek to see exactly what is going on.”

Konick stated the drone could be used for any type of incident to evaluate the situation before human life is risked.

Before taking the drone on a mission, firefighters have to go through 40 hours of training. Smaller drones are used for practice before personnel graduate to using the larger versions. The fire department has established its own set of rules, regulations, and procedures, directing how the drone is used and operated on emergency calls.

“We sent one person from each shift to a training class for drones put on by the Mansfield fire department, who also has a drone,” Konick said. “There is a handful in the DFW area that has drones and has been doing this for a while. So we are catching up to them.”

Firefighter Kameran Miller, and engineers Tony Townley and Julio Hernandez were sent to the training in Mansfield. When they returned, the three trained others how to operate the aircraft.

The drone was deployed to a call with the dive team in Kerns on June 13 for the recovery of a body from a gravel pit. During the call, the drone provided an overhead view of the area to assist divers.

The police and fire departments have trained drone pilots and are working to secure a certificate of authorization from the Federal Aviation Administration. The certificate allows for specific unmanned aircraft activity. The FAA conducts comprehensive operational and technical review, which ensures the user can operate within the airspace safely.