Waxahachie, TX - After 21 surgeries, Chris Kelley still struggles daily. He also now hopes to purchase the ideal service dog to aid in his recovery but needs a little community support.

The 2004 Southwestern Assemblies of God University graduate was born with epilepsy and, as he grew older, the seizures became more severe. He married the love of his life, Romelia Kelley, in 2007. At that time he averaged eight seizures a day.

“I feel bad for my wife. I really do. Because we got married and it just shows you true love,” Chris relayed.

Six months after the wedding, Chris admitted himself in the hospital for a weeklong EKG. The visit took a turn for the worse. “They would make me have seizures, and because of the hospital’s mistake, I hurt my back,” he disclosed. 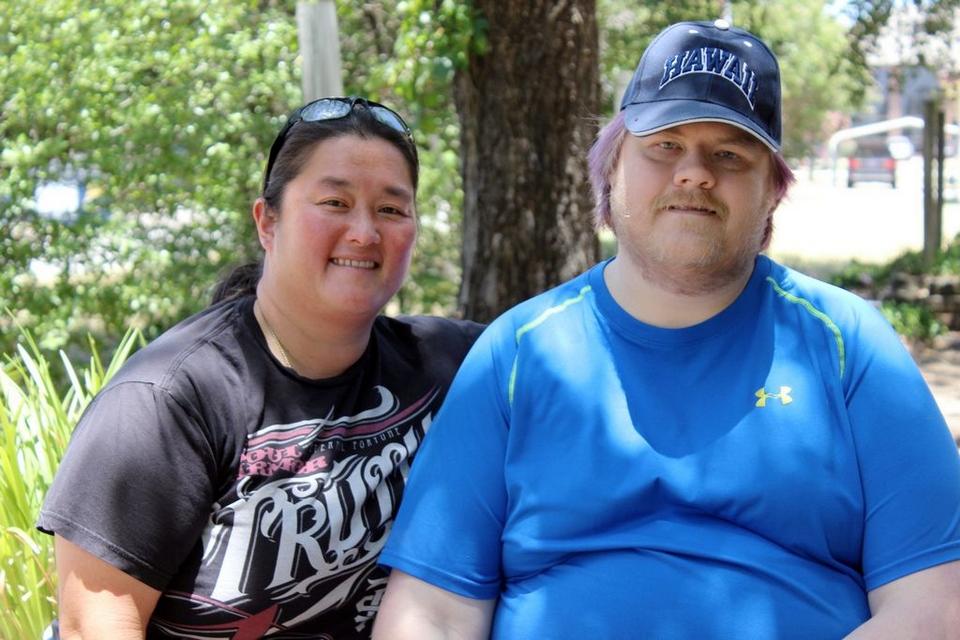 Eighteen months later, the Kelleys flew to Stamford, California for a temporal lobectomy, where doctors removed his temporal lobe. The seizures improved but more medical attention was required. Chris underwent a total of 15 procedures for his back and neck.

“They have done everything from nerve burning to injections to a spinal stimulator put in twice, which caused severe MRSA both times,” Chris elaborated.

Megan Sprinkle is the owner and head trainer at House of Voodoo Kennel in Ft. Worth. For $5,000 she is training a labrador retriever for Chris Kelley. She is pictured working with her service dog that is trained for cardiac alert. — COURTESY SPRINKLE

A hard fall then delayed Chris’ significant back surgery. A metal rod was placed in his shattered arm and shoulder in February 2015, and two months later he was back on track with the back surgery. But in the meantime, Chris had a few more falls that resulted in tearing his meniscus three times — all of which were the result of seizures.

“I had what is called a t-lift,” Chris explained. “They put four screws in around L5, S1 and then, from the four screws because I didn’t have a disc there, they put in a fake disc with marrow and the took bars on each side to hold it stable and make it solid again.”

Even with the necessary back surgery, Chris developed fibromyalgia, osteopenia, tinnitus, and PTSD. He said his pain level is sometimes through the roof.

“You know how they have that one-to-10 scale? There’s no 10. It goes to like a 20. It feels like a really hot burning machete going all the way down my spine,” Chris explained.

The pain and medical conditions have taken away from his social life, and the regular use of a wheelchair broke his confidence.

“I use my chair a lot. I have a fear of getting out of bed and falling. It gets so bad that I don’t want to get out in public no more,” Chris admitted. “Because I’ve fallen so much and I don’t want to fall and not be able to get back up. I even watch my church online because I fall so much.”

Chris said when he is unbalanced in public others will assume he is drunk. Romelia added, “And also he thinks when he is in his wheelchair like people are looking at him and say, ‘oh, you’re so young. Why are you in a wheelchair?’”

Chris affirmed that’s the question he always gets. Yet, he just turned 40.

The Kelleys are exhausted and overrun by medical bills and the only viable solution to help with his medical condition remaining is a service dog.

Years ago he registered with Canine Assistants, based out of Georgia but to no avail.

He filed extensive paperwork and checked-in consistently. After five years, the association relayed the news that Chirs did not qualify and returned all the photos and paperwork. “For me, it was like a slap in the face because they didn’t even try to connect me with anybody,” Chris added.

After Chris posted his hopes of one day acquiring a service dog on Facebook, he was connected with the owner and head trainer at House of Voodoo Kennel, Megan Sprinkle.

On a recent Saturday, the Kelleys met with Sprinkle in Ft. Worth to discuss her services and Chris’ needs. Sprinkle has trained dogs for 10 years and service dogs for four years. For Chris, the visit ”[...] was the most fun I’ve had in awhile. And I was in my wheelchair, and that dog made me smile so much. He knows I was having an off day.”

“Now I am in the process of finding the perfect puppy for him,” Sprinkle shared.

Sprinkle picked out a labrador retriever for Chris and will begin the training process at two months old. Within 18 months, Sprinkle will expose the dog to different textures, noisy activities and a variety of environments.

“Chris is usually confined to a wheelchair so he needs a dog that has high retrieve drive and that’s highly trainable but not over the top and known for dominance and protective instincts,” Sprinkle informed.

“The dog I’m getting is going to help me be mobile,” Chris said. “There are times with tinnitus in the ear I’ll be walking, and suddenly my leg will go out right from under me.”

The service dog will cost the Kelleys $5,000 out of pocket, which is an affordable price compared to other services. House of Voodoo Kennel is unique because donations it receives goes toward purchasing the animal.

“My rate is $5,000 per dog,” Sprinkle informed. “I’m trying to do what I can to give back to the community because I have a service dog myself. I understand that most of these people don’t have money and at most, some get $600 a month to live off of and that’s not very much especially when most service dog programs charge from $10,000 to $30,000 a dog.”

House of Voodoo Kennel offers a variety of services such as protection work, pet obedience, boarding and more. If interested in making a donation toward the business, contact Sprinkle directly at 817-773-3174, and she will make sure the contribution directly impacts the donor’s request.

Before the interview was wrapped up, Sprinkle wanted to clarify the rules surrounding service dogs.

“There is absolutely no certification or licensing or documentation for service dogs. There’s a lot of misinformation, and we have to come and bandage it up. You can only ask, ‘Is this a service dog required because of a disability?’ Yes or no. and ‘What task is the dog trained to perform.’ There is also no leash, collar requirement anything. In fact, my dog works exclusively off a leash.”

By speaking with Sprinkle and the Daily Light, Chris said it “shows me there is still hope.” Romelia piggybacked, “It was also a lot of trust in the lord to carry us through this because we’ve gone through a lot but we knew something would come out of it. And finally, there is this open door where we are on the road to get that service dog.”

The Kelleys created a GoFundMe page for donations to purchase the much-needed service dog at https://www.gofundme.com/akq4jz-service-dog.