Over 500 Waxahachie, area church members participate in Worship Outside the Walls project

About 500 community church members scattered around Waxahachie to serve outside the walls of the congregation through the annual “Worship Outside the Walls” project.

The communitywide project — also known as WOW — was established seven years ago when First United Methodist Church initially partnered with the Presbyterian Church in Waxahachie. 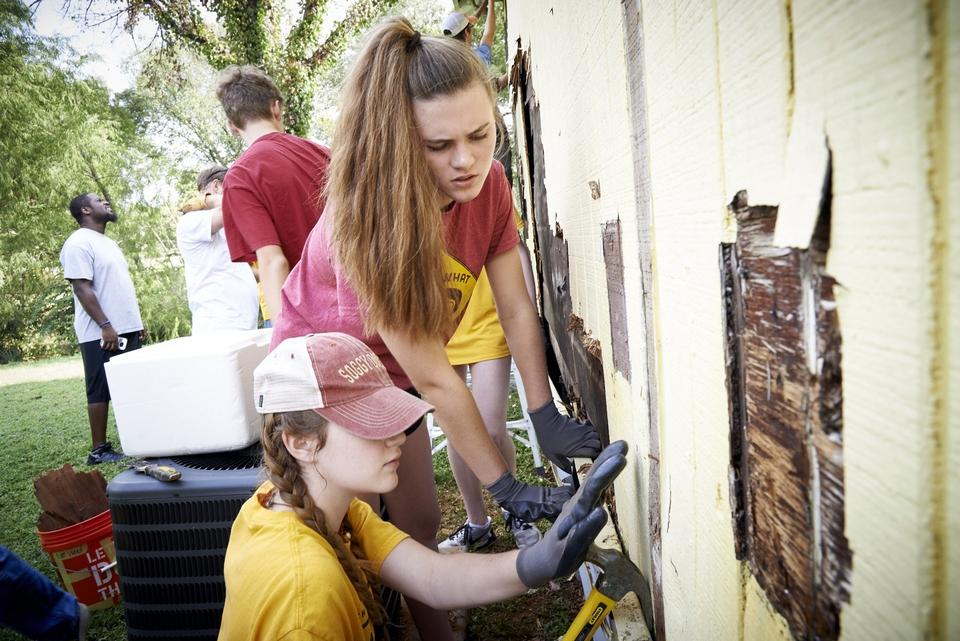 “We are serving our community and worshiping through working and loving our neighbor,” explained Val Stewart, the children’s director at First United Methodist Church, after the 11th WOW event in seven years. “Instead of sitting in the pew, we are actually serving and loving others as Christ would have.”

On Saturday, community church members first gathered to eat breakfast for about 20 minutes and then quickly worship and sing together before being released into the community for their designated projects.

Volunteers sewed shorts and dresses to donate to The Little Dresses for Africa organization. — COURTESY FUMC

Teams of volunteers visited Covenant Assisted Living, Buffalo Creek Assisted Living, Brookdale Waxahachie, Legend Oaks and Red Oak Rehab. Participants also chalked the Waxahachie hike-and-bike trail, gave cookies and cards to Kairos Prison Ministry and first responders. A group of women sewed dresses and shorts to be donated to The Little Dresses for Africa. The dresses will be blessed Oct. 21 at First United Methodist Church in Waxahachie before being sent to Africa.

Military care packages were also created, while community clean-up and painting was conducted at various locations around town, and prayer blankets were made.

Flowerbeds were constructed at the Dunaway Elementary and the Turner pre-kindergarten campuses. Volunteers also painted at Texas Baptist Children’s Home and at Wilemon STEAM Academy.

A DIFFERENCE IN A CHILD’S LIFE

On Monday, pre-kindergarten students at the Turner campus had already begun to utilize their newly-enhanced interior courtyard after community members of all ages gathered to create the outdoor education area during the WOW even.

Two wooden, elevated garden boxes were constructed with the idea to plant flowers and produce. Volunteers also performed yard work to remove weeds and beautify the space and even labeled stepping stones with numbers in a grassy patch. Two sets of tables and chairs were donated, as well.

Those who worked on the Turner campus were individuals with Ferris Heights Methodist Church, First United Church and What’s Happening Now Ministry.

The courtyard can be entered through a door connected to the indoor STEM lab. The proximity between the two allows messy, hands-on projects to be done outside. The courtyard is an extension to not only the STEM lab but the classroom as well. Eventually, all work done in a classroom will have to opportunity to be done in the courtyard.

“I think it’s important to use this space and allow the kids to get dirty and investigate with their hands. We have a lot to add to it,” explained Laura Northcutt, the campus counselor.

Northcutt said she first witnessed the students’ curiosity come alive in the courtyard during a student’s birthday celebration. The school counselor has been on the Turner campus for two years and has never seen the courtyard used to its fullest potential.

On Wednesday, she observed students hopping from one stepping stone to the other, saying the numbers out loud that marked each stone. She mentioned the students were English learners and noted the area is diverse enough to help a variety of students learn and express themselves.

“Kids at this age learn through exploration. So if we put the right experiences out there the experience and learning is going to come,” Northcutt explained.

Funds from The Greenery played a significant role in the Turner renovation. The WOW project was just one phase of the interior courtyard. If interested in advancing the area, email Northcutt at .