The former charges against Jones alleged that he abused his official capacity and threatened a potential witness. Jones also faced charges of tampering with evidence, misuse of official information, retaliation, and deadly conduct.

These charges were related to alleged actions taken by Jones during his re-election campaign for the constable’s office. He was first arrested in May 2016.

Melva was indicted in November 2017 on the charge of obstruction or retaliation against a witness.

“Well I was happy when I heard the news, but I was guarded. There has been so much going on that you don’t think that your ship is going to come in or that you really don’t have a future,” Jones said. “That is how you look at life. Tomorrow is not even a guarantee as far as my safety goes.” 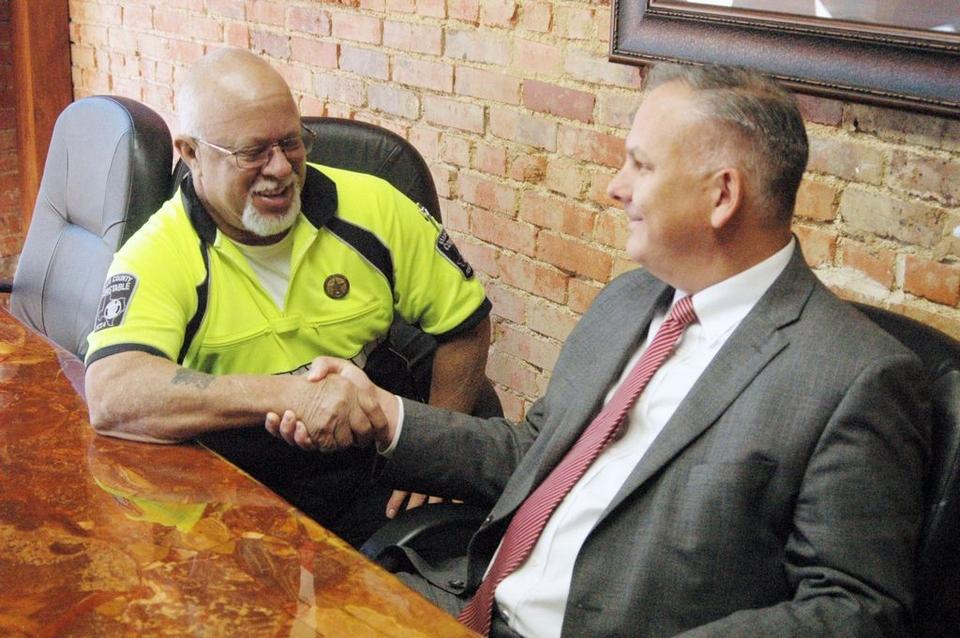 With the criminal case pending, the Ellis County and District Attorney’s Office filed the first civil suit against Jones to remove him from office on Feb. 27, 2017. That case was later dropped May 15, 2017.

Four months later, the jury in the April 18 civil suit found the charges against Jones to be “not true,” and he was reinstated as constable.

Dan Gus first represented Mike during his civil trial. He later joined Mark Griffith to assist in the criminal proceedings.

Gus stated this case has been an eye-opener for him.

“The discovery and vindication of the truth is not always the objective of all the parties in the system,” Gus said. “Seeing that and seeing what a profound impact it can have on an individual life — where they can be put through that meat grinder when they haven’t done anything wrong — it is kind of a sobering experience.”

Gus stated that, as he looked into the case, he saw inconsistencies in the evidence and testimony, which, in his view, showed Jones’ innocence.

“The more I dug, the more I saw problems with what was being alleged against the constable. The more I saw that there was not a critical evaluation of the accusers,” Gus said. “I handle big lawsuits all the time and a lot of money that is the issue, but this was a man’s life that was in my hands. That was a huge responsibility. It was very gratifying to see it though.”

Jones said the two-plus year stretch in his life has been a humbling experience, and he hopes that it will bring about change.

“Our system is built upon your innocent until your proven guilty, yet that is not how we are taught and how we are raised. You’re guilty until your proven innocent,” Jones said. “I am sure that everyone thought Mike Jones was guilty with all of these charges, but I wasn’t. Have I been guilty of doing that too? Probably. Are there people over in our jail that are sitting over their innocent? Could be.”

Jones explained he hopes to work with law enforcement agencies around the area to start these conversations and change the thought process.

“If the guy is telling you that he is innocent, you need to work to find him innocent. Don’t work to find him guilty. Let the guilty accidently happen,” Jones said. “You are asked to prove him innocent. I think that is where we have gotten off (because) it is statistics. It is numbers. It is everything. I think that we need to change how we operate and how we think.”

In addition to the charges being dropped against Jones, the criminal investigation against Ellis County and District Attorney Patrick Wilson has been terminated as well.

Jones’ attorney in the criminal case, Mark Griffith, previously filed motions that alleged Wilson’s office monitored his client’s email without a warrant. The motion notes some of the emails monitored included attorney-client communications.

When the motions were filed in May, Wilson formally stepped aside from the case and asked a special outside prosecutor to review the complaint. A special prosecutor was appointed and the Dallas County District Attorney Office then took over the criminal cases against the Jones.

Wilson stated it is best for all parties going forward to lay down their swords.

“I think that it is time for everyone to move forward. I don’t think that anyone is tremendously benefiting at this time from all that has come of this,” Wilson said. “It obviously has not gone the way that some folks thought it should go, but it is time to move forward for the greater good of the community.”

Wilson stated the case had a lot of extraordinary circumstances connected with it — one of which was an elected official indicted on multiple charges. He noted each case poses its own set of challenges, which is difficult to place a dollar figure on the work involved to bring a case forward to trial.

“We get paid to prosecute cases, and that is what we do all day and every day. There are thousands of cases here. So at some point, you do have to make a decision to go forward,” Wilson said when asked what the investigation into the alleged actions against Jones cost the county. “To answer your question, we can’t quantify how much was spent on this case or on really any given case that comes through this office.”

Wilson stated had the jury voted differently in the civil trial, the case might have been placed on an entirely different path.

Gus stated he is glad the case had come to a conclusion for both sides and for the good of Ellis County.

“With this being put behind us, that relationship can be restored. There is no resentment, and there is no bitterness. Mike can continue to work and interface with the district attorney’s office in a constructive and cooperative way,” Gus said. “I applaud Patrick in his role in helping us get this all behind us for the good of the county.”

Gus stated his office will move forward on a defamation case against Ellis County Precinct Four Justice of the Peace Steve Egan and Kristin Ortiz who provide testimony in the trial.