Waxahachie, TX - From the Guinness Book of World Records to the streets of Deep Ellum, Oliver Peck has shared his love of tattoos and oddities with the masses.

And soon, that passion will be on display in his new “man-tiques” store that will help benefit the Waxahachie Odd Fellows mission of community service. The shop will be located on the bottom floor of the Odd Fellows building in downtown Waxahachie.

Peck is the co-owner of the Elm Street Tattoo shop in Dallas and owns True Tattoo in Hollywood. At 19 years old, Peck started his career as a tattoo artist. 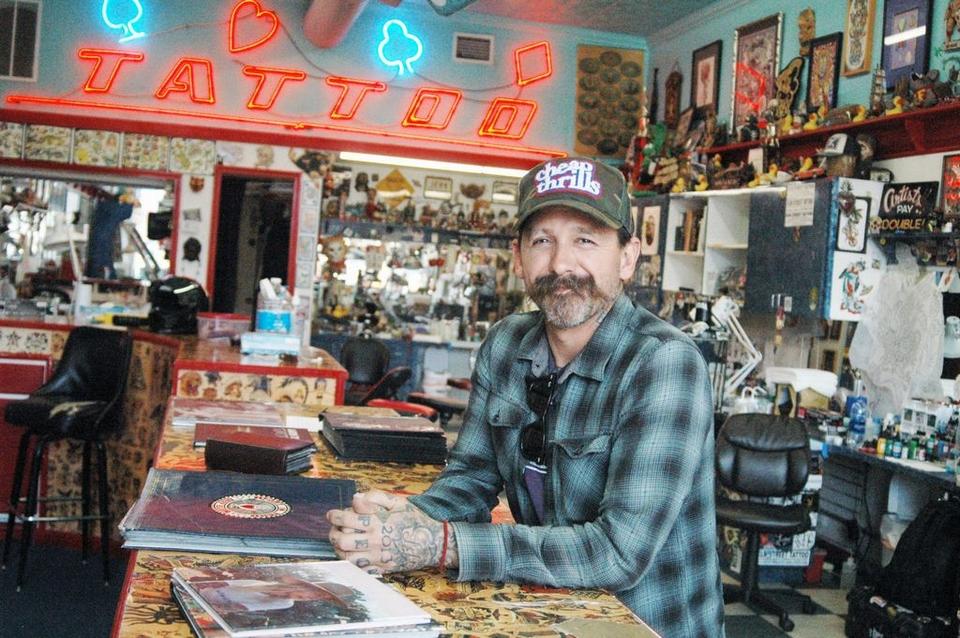 “When I was young, and I got out of high school I wanted tattoos. So I started tattooing myself and started tattooing some friends. It just sort of progressed and snowballed from there,” Peck said. “After about a year of doing that, I met I guy in Dallas that was a long-time professional tattooer. He offered to teach me how to tattoo professionally, and I worked with him for a few years. Then I went on to open Elm Street Tattoo.”

His career has taken him to several countries to tattoo including England, Ireland, Italy, Germany, and Japan. In 2008, Peck made his way into the Guinness Book of World Records.

“I started doing a Friday the 13th tattoo marathon the first couple of years I was tattooing. As that grew and grew, it kind of became a thing to see how many tattoos we can do in a day,” Peck said. “My personal record for people tattooed in 24 hours is 415. It ends up being less than three minutes per person. It takes a lot of people to do that to set up and help to move the line though.”

For the past six years, he has been a judge on reality show “Ink Master” on the Paramount Network (formally Spike). Through this role, he judges the talent of up-and-coming artists.

“At first it didn’t seem like it was something that I really wanted to do. Previously tattoo TV had just been a drama show,” Peck said. “While it does have that element a little bit, but I’m able to go on there and give honest options of what tattoos are good and what tattoos are bad. The overwhelmingly positive response of the show outweighs anything else.”

Throughout the show, contestants compete in various challenges in which their artistic skills are judged. The show is now in its 11th season with production on season 12 starting in January.

Peck stated there are times when people disagree with a decision made on the show, but at the end of the day, everyone remains friends.

Outside of the television show and tattoo parlor, Peck has been a member of the Waxahachie Odd Fellows Lodge for the past 15 years and enjoys the opportunity to serve. He became interested in the group after learning about the work they do.

“I got linked up with friends of mine from Waxahachie who are a part of the artist community. I started doing events with them and got interested,” Peck said. “If you have got leisure time to spend, you might as well do something good that is going to benefit someone and have fun at the same time.”

Peck stated through his service as an Odd Fellow it has allowed him to meet people from around the community.

“For me, it is just being a part of the community and doing some civic service and meeting people that I would not have normally would have met in my normal walks of life,” Peck said. “We are all there for a common goal, a common good. We are all there and we work together. It is a very unique experience, unlike your regular friend group.”

The man-tiques store is anticipated to open within the next month. It specializes in unique items that men love, want, collect and crave. It will be made up of different booths that feature items that range from toys, military collectibles, signs, and sports mostly geared toward men.

“There are a lot of antique stores down there that kind of cater to the older generation. We are going to cater more to the younger generation. It is not your typical teacups, but it is just interesting stuff that could be 10 years old or 100 years old,” Peck said. “I love going antiquing, picking, and shopping for things. I have friends that have booths at antique malls around the metroplex. When we started talking about doing this one here, we got a lot of interests.”

Peck stated the store is both a good fit for the lodge and the city, and will be something cool people can enjoy.

The remaining square footage will be used to create Heart in Hand, which is the retail store for the Elm Street Tattoo shop. A private room in the space will be used for cosmetic tattooing. Peck is still in negotiations with the city for a full tattoo shop.

“We do have [cosmetic tattooing] at our heart and hand location here in Deep Ellum. We have two girls that do piercing and cosmetic tattooing. Mostly eyebrows. Eyebrows are a really popular thing right now for people getting it,” Peck said. “Most women are just tired of putting on so much makeup every day, and this is just something that they could get done and would last a couple of years. It is a relatively painless procedure.”

Peck stated cosmetic tattooing would also aid people who have been hurt in accidents or have undergone medical treatments. He noted it is a service that is needed in the community.

The date when the Heart in Hand store and the cosmetic tattooing service will open has not been set at this time.

Peck hopes that this store will bring the Odd Fellows and the community together so they can learn more about each other.

The stores will be located in the Odd Fellows building at 208 S. Rogers St. in downtown Waxahachie.

For more information about Heart in Hand, visit www.heartinhandgalllery.com.