‘Justice for Gabe’: Vaughn Jr. sentenced to 99 years for the murder of 17-year-old in Waxahachie

Waxahachie, TX - A Red Oak man found guilty for the murder of 17-year-old Gabriel Richie in 2017 was sentenced to 99 years in prison Friday by a jury in the 40th District Court of Ellis County.

The defendant, 20-year-old Jude Shawn Vaughn Jr., was found guilty of felony murder by the same jury on Thursday for his actions related to the shooting death of Richie on Nov. 14, 2017. The jury did not, however, convict Vaughn for capital murder, which would have sentenced him to life in prison without the possibility of parole.

His co-defendant, 20-year-old Trevis LaDavoin Baudoin, previously accepted a plea deal in November that sentenced him to life in prison without parole.

Vaughn had rejected that same plea agreement. The 99-year sentence is the maximum allowed for felony murder. He was also assessed a $5,000 fine.

Prior to the trial, Tarrant County Assistant Criminal District Attorney Timothy Rogers was appointed as the special prosecutor in the matter. 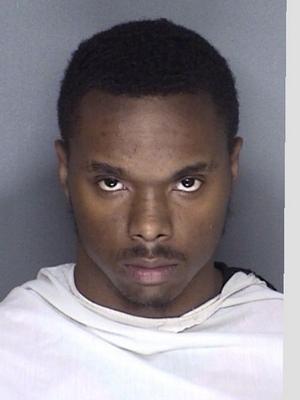 After reaching a guilty verdict late in the evening Thursday, the proceedings reconvened at 9:41 a.m. Friday in the 40th District Court of Ellis County for the punishment phase of the trial.

The state called its first witness, probation officer Joshua Tay, to the stand. Tay stated to the jury that Vaughn was on probation in 2016 for a felony charge of cruelty to non-livestock animals.

Tay told the jury that, over a probation period of three months, Vaughn consistently missed or rescheduled several appointments, failed multiple drug tests and endorsed lying to get out of consequences.

Tay also stated to the jury that his behavior demonstrated a good chance of continued criminal behavior.

After the defense passed the witness, the state called Red Oak resident Fredrick Eldridge Jr. to the stand. Eldridge recalled to the prosecution that he heard kids screaming and crying in the back of his house in Sept. 2015.

“The child told me that one of the older kids threw a cinder block over his head onto a kitten,” Eldridge said. “He was terrified. He just saw a kitten getting smashed by a brick.”

Eldridge recalled to the prosecution that one of Vaughn’s associates was trying to set the kitten on fire inside of a bucket. After retrieving it from the bucket, Eldridge found that the kitten was still alive.

“It was breathing,” Eldridge said to the court. “Just from the [panting], you could hear it. You could fit it in your hands.”

Eldridge iterated to the prosecution that he put the kitten inside his vehicle and tried to contact any animal shelters that was open. When he got a hold of the Lancaster Animal Shelter, he made his way over there to save the kitten.

But Eldridge said it was too late. The kitten had already passed away inside his vehicle.

Eldridge said he called the Ellis County Sheriff’s office on the way back to his residence. When he arrived, one of the children identified Vaughn as one of the individuals who threw a brick at the kitten.

The prosecution then passed the witness to the defense, where defense attorney Phillip Hayes clarified with Eldridge that he had not seen any of these actions himself. Eldridge stated to Hayes that he had not.

After the witness was dismissed, the prosecution recalled Waxahachie Police detective Kyle Ranton to the stand. Tarrant County Assistant Criminal District Attorney Timothy Rogers then submitted photos from Vaughn’s phone into evidence, which investigators seized after Vaughn gave consent to search his phone.

The pictures submitted into evidence included Vaughn in a red shirt holding up his middle finger, an image with other associates holding liquor bottles along with the text “free blood” and three separate photos of a gun in somebody’s lap. Hayes clarified with Ranton during cross-examination that the pictures were merely on his phone, and it wasn’t clear when they were taken or how they were obtained.

The state then called Fort Worth Police officer Chris Wells to the stand. Wells told the prosecution that he worked 18 years in a gang unit and had experience looking for identifiers in a Blood gang member.

Upon inspection of the submitted evidence from Vaughn’s phone, Wells pointed out several identifiers, including the red clothing, the “bloodgang” Snapchat handle, the weapons found in the photographs and the “B” hand sign many of Vaughn’s associates displayed in the photos.

Hayes asked Wells during cross-examination that if he went into a church, wore a red shirt, put up the “B” Blood hand sign and told the pastor he was a Blood gang member, if that meant he was actually a blood gang member. Wells answered “no” and explained that those qualifiers need to be put into the context of a situation.

The last witness prosecution called to the stand was Gabriel Richie’s mother, Karrie. Karrie expressed to the prosecution that November was always a hard time for the family because their oldest son, Jordan, had taken his own life just five years earlier.

Karrie said that, even though the brothers were 10 years apart in age, Jordan was Gabriel’s idol. She said losing him devastated Gabriel, causing him to lose sleep and become anxious around other people.

Karrie recalled to the jury on Nov. 14, 2017, that she was teaching a class in Fort Worth when she got a call from her daughter. She said her daughter told her that Gabriel was supposed to bring her dinner at work, but he never showed up. Karrie said they called one of their neighbors, who they were on the phone with as she searched the house.

Karrie recalled to the jury the moment when the neighbor found Gabriel on the bathroom floor. She said that her neighbor told her that his body was cold.

Karrie began to cry on the witness stand as she recalled the unfoldings, explaining she left for the house as soon as possible. She remembered seeing police cars and fire trucks in front of the house upon her arrival.

Karrie then saw her daughter.

“She put her head down,” Karrie recalled while sobbing. “And I knew.”

Ever since then, she said her family now has two memorials in November – one for Jordan and one for Gabriel.

“It just seems to get harder,” she said. “The days, the months, the times leading up to that month. We struggled with daily life and how the world could continue on.”

She said she didn’t want to testify because she doesn’t handle herself well in public settings. But she said she had to be there – for Gabriel.

“I want to honor Gabe,” she stated. “I want justice for Gabe.”

The defense declined to cross-examine the witness. Prosecution and defense both rested and closed, and the court adjourned at 12:23 p.m.

After a brief recess, the jury reconvened at 1:49 p.m. and were read the charge by 40th District Judge Bob Carroll.

Carroll explained the jury had to decide whether to sentence Vaughn to five years or 99 years in prison.

Tarrant County prosecutor Julie Harbin began closing remarks, arguing to the jury that Vaughn’s character is exemplified by thinking it’s okay to throw a cinder block at a newly born kitten, or Snapchat a photo of a gun with the text “play stupid” on it.

She stated the Richie family would feel the consequences of Vaughn’s actions for much longer than whatever his sentence is.

Hayes then spoke on behalf of the prosecution, stating what happened to the Richie family is horrible and, no matter the sentence length, nothing would make that family whole again.

At the same time, Hayes argued that five to 99 years is a big decision to make. He remarked that anything over 60 years is essentially a life sentence.

“Jude’s a 20-year-old man,” Hayes said to the jury. “He’s a wannabe gang person. He goes on social media and does stupid things. But the worst thing you can say about him is that he was with a group of people who killed a kid.”

He asked the jury to not begin their decision on the sentencing at the high end (99 years). Instead, he encouraged the group to start at five years and build up from there based on the severity of Vaughn’s crime.

“You’ve got a man’s life in your hands,” Hayes pleaded to the jury. “All I’m asking you is to wield that power with mercy.”

After Hayes concluded his remarks, Rogers approached to counter, stating that Vaughn has seen more of his life than Richie saw his.

“This 20-year-old man is lucky that he didn’t encounter himself when he was 17,” the special prosecutor stated to the jury. “He’ll live to see 21, 22, 23, and so on. Gabe will never get the chance to grow up like Jude did. That 17-year-old voice will never be heard by his father, mother, or sister ever again. All because of [Vaughn’s] choices.”

Rogers asked the jury to look at exhibit one – the body of Gabriel Richie — before they decide on a sentence length. Because, he said, that image is never going to get any older.

“The sentence you give to this man, in this case, is going to be felt to the core by this family,” Rogers stated. “You give him every year you think he deserves.”

The jury deliberated for two and half hours before they reconvened at 5:04 p.m. The jury sentenced Vaughn to 99 years prison and assessed a $5,000 fine.

Carroll excused the jury from their service at 5:09 p.m. and carried out the sentence at 5:28 p.m.

Gabriel’s sister, Savannah, then delivered the first of two victim impact statements to Vaughn, recalling that she found out she was pregnant a few weeks before her brother was murdered. She said he was so excited when he found out he was going to be an uncle.

Gabriel will never have the opportunity to meet his nephew who carries his name, Savannah stated to Vaughn.

“I know you are not the one who pulled the trigger,” Savannah said toward Vaughn. “But I hold you responsible for the murder of Gabe just as much as I hold Trevius responsible.”

Gabriel’s stepbrother, Kent Malloy, also gave a statement to the court, stating that when Gabriel died, he didn’t just lose his brother – he lost the only thing in life that made him happy.

″’17-year-old Waxahachie boy’ doesn’t do him justice,” Malloy stated to the court. “He was much more than that, and anyone who has ever met him can argue that he was quite possibly the best person they’d ever met.”

Sheriff’s deputies took Vaughn away at 5:47 p.m. The trial adjourned at 5:48 p.m. Rogers said Vaughn and his attorneys are planning to file an appeal, and Rogers’ office is preparing to handle the legal challenge.