Waxahachie, TX - A 1,153-lot development could be placed alongside several homes by 2028 — but not if a group of residents has anything to do with it.

The development, called Lonesome Dove, is a 458.572-acre mixed-use development planned west of Farm-to-Market 664 and north of Marshall Street. A public hearing for the development was initially scheduled to be had during the Waxahachie Planning and Zoning commission latest meeting on Feb. 26.

However, the applicant, Arbors Development LLC, requested a continuance so the developers could make a few revisions to the current plans, which delayed the hearing until March 26.

“We the people are ganged-up out here,” resident Wesley Tryon stated. “I’m just a small voice crying out in the large wilderness. It’s very disheartening.” 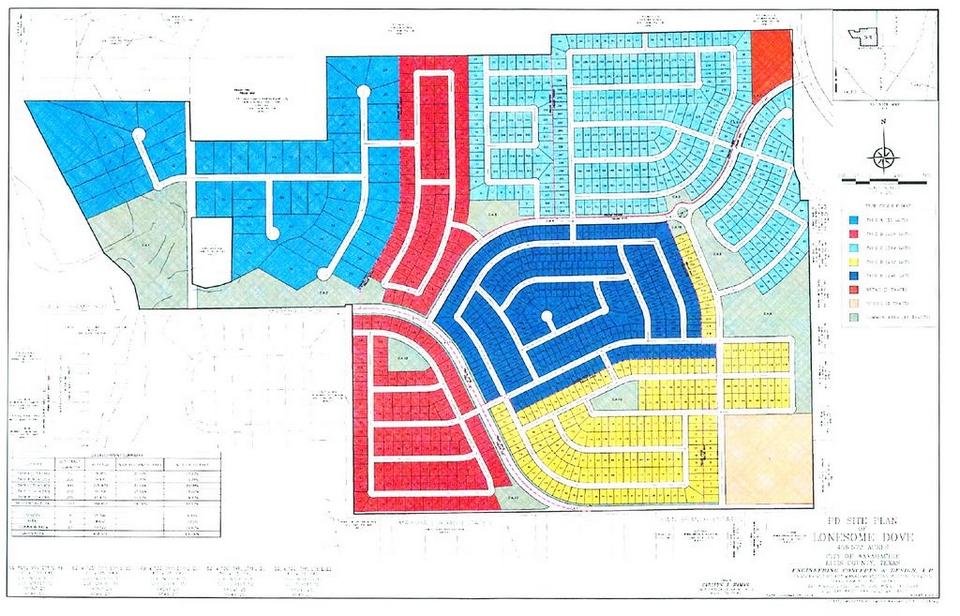 According to the planned development documents, Lonesome Dove would be a mixed-use development that would have 1,153 houses, a 15.546-acre school tract, several sites for retail and 17 common areas that would total to 53.522 acres of open space. Amenities include a swimming pool, an 8,600-foot hike-and-bike trail, a playground and a dog park.

The lot sizes range from 6,240 square feet to one acre, while the dwelling units are at 1,800 square feet. The maximum overall density is 2.55 units per acre.

The 10-phase development would potentially commence later this year and be completed by 2028, pending approval from the planning and zoning commission and the city council.

One of the residents’ biggest concerns is the 15.546-acre school tract, which would be built on the southeastern corner of the development alongside Marshall Road and nearest US Highway 287.

Another concern is how the development would impact the area’s geography. Resident Jerry Johnson said the school would be next door to him, and he lives in a lower part of a hill where it floods all the time.

Johnson said he’s concerned how a development like Lonesome Dove would further impact his property.

“When it rains really hard, three acres of my land goes underwater about four inches deep,” Johnson expressed. “They put all those houses up there with all of the concrete and asphalt up there, the water can’t soak up anymore, and it’s going to run right down here on me. What’s going to happen to me now? It’ll fill up in a heartbeat. My whole front yard out here will be underwater. That’s unreal.”

Planning director Shon Brooks said residents within 200 feet of the development were sent a notice of the project and its Feb. 26 public hearing last month. While Wesley Tryon did not live within the setback distance, several of his friends did and notified him of the letters they received.

He then took initiative to make sure others knew the full implications of the project as well.

One resident that Tryon spoke to prominently stuck out. She claimed that she didn’t get the notification because she was a new resident alongside the road.

When Tryon informed her of the project, she became distraught.

“She said ‘Oh my God, I just moved here from Brown and Mustang Creek where nobody lived forever,’” he recalled. ”‘Then they started developing around me. Now you’re telling me they’re going to do this again in my backyard and I just moved here?’”

Tryon said he asked her not to shoot the messenger.

Tryon estimated that he knocked on about 90 doors on Marshall Road and Farm-To-Market 664. A petition he organized with his wife collected about 108 signatures against the project’s development.

“All we did was knock on the doors and wake them up,” Tryon stated. “Everybody wants to look out there and see cattle grazing and corn growing - not rooftops.”

Brooks explained that the developer needs to include less density in the project and lay out a more thorough amenity package before it can be brought back before the commission. Chairman Rick Keeler said when the applicant does come back in a few weeks, the commission will only consider whether or not their proposal adheres to their current zoning ordinances.

“It doesn’t matter how much land they’re taking up,” he said. “It doesn’t matter if they’re using up farmland. We’re simply going to take into consideration and make our decision based on how they adhere and comply with the zoning ordinances that are currently in place. That’s all we’re going to consider.”

Tryon stated that residents around the area had made many sacrifices to get where they’re at right now. He said he finds it unfair that this is being forced upon them now.

“We’re trying to live the American dream,” Tryon remarked. “We work hard. We make our money. We pay these taxes and all this just to have the country way of life. Then they come in the name of the all-mighty-dollar and shove the city down our throat.”

Tryon stated that it’s unlikely that a group of residents can stop development like this from happening. Still, he’s going to do what he can until then.

And, now that the public hearing has been moved to March 26, he plans to collect even more signatures to bring before the city.

“Fighting’s in my blood,” Tryon remarked. “They say you can’t fight city hall. Well, at least you can go down swinging.”

The public meeting on the project is currently scheduled to take place 7 p.m. Tuesday, March 26 at the City Hall, located at 401 South Rogers Street.