‘It will change Ovilla’: TxDOT receives feedback on proposed expansion to FM 664

Waxahachie, TX - Widening Farm-to-Market Road 664 from two to four lanes is not supposed to displace many residents’ properties, according to Donna Simmons, Texas Department of Transportation Public Information Officer.

Unfortunately, that isn’t the case for Ray Rogowicz and several other residents that attended the project’s public hearing Tuesday night. 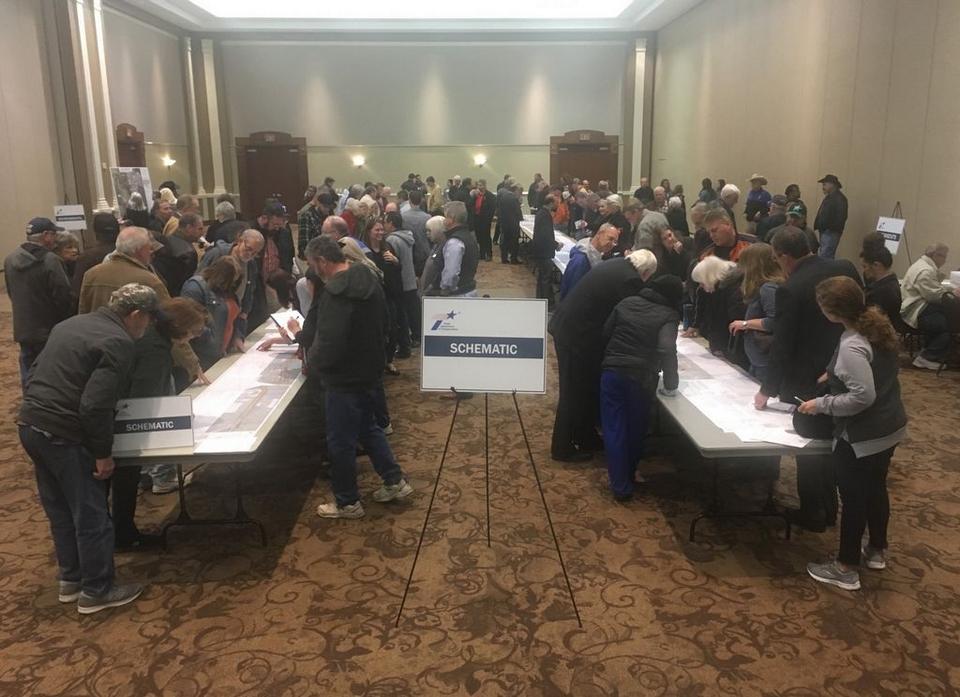 The proposed lane expansion would widen 7.8 miles of the road from U.S. 287 to Westmoreland Road in Ovilla. According to a TxDOT notice, the initial plan would consist of 12-foot wide travel lanes, five-foot sidewalks in both directions and 14-foot wide outside shared-use lanes.

The proposed project is currently planned to develop simultaneously alongside another design going on the east side of Farm-to-Market 664, which would widen East Ovilla Road from a two-lane undivided rural roadway to a six-lane rural roadway.

The estimated construction costs are $97.5 million.

“The road is so congested now,” remarked Raymond Schovanetz. “They needed to do a widening project. It was inevitable.”

TxDOT hosted a public hearing Tuesday night at the Waxahachie Civic Center to receive feedback on the proposed project from the 152 residents in attendance. Simmons said these hearings are critical to project planners so they can learn what changes may need to be made on a proposed design.

She recalled one hearing last year where over 259 residents came to speak out against a six-lane expansion on Farm to Market 1387.

“Since that hearing, [TxDOT] has gone back to the drawing board to figure out a better way to do that,” Simmons expressed. “The comments people make at these meetings make a difference.”

However, Schovanetz doubts how significant some of the changes might be to this particular lane expansion. He lives on the roadway along with his wife and received a letter from the department informing them of the meeting.

When they got to the hearing, they learned that the easement would come within 20 feet of their bedroom, placing their house right alongside the proposed roadway.

“It would render the house unsellable, and technically, unlivable,” Schovanetz stated. “We’ve lived there for 48 years. It’s the only house our kids and grandkids have ever known. It’s home.”

Schovanetz said it’s possible the right-of-way could be moved to miss his house. However, he doesn’t believe it’s very likely and doesn’t want to get his hopes up.

“I’m waiting to see what happens,” he expressed. “Everything is moving south from the metroplex. Do we like it? No. But they’ve gotta go somewhere.”

Rogowicz, however, is in an even more dire situation. He has owned and operated an online trade business, ExhibitTrader.com, in Ovilla since 2007. When he came to the public hearing, he was eager to see how it would impact the geography surrounding his company.

It was to his surprise when he found out that he wouldn’t have an office building by the time the project would be completed.

“I’m probably one of the only properties that’s actually going to be wiped out completely,” Rogowicz expressed.

The offices for ExhibitTrader.com are located just alongside the roadway at 3324 Ovilla Road. Rogowicz said he isn’t surprised that his entire property would be displaced – just disappointed.

“I own the real estate,” he expressed. “I own the business. Anything I say about this idea isn’t in my best interests because I am hit so hard. The three things I’m thinking about as I’m walking out the door is reality, reality, reality.”

Simmons stated that property owners who are displaced would be expensed at fair-market value for their displaced properties. Rogowicz said he wouldn’t have any issues with that as long as he is fairly compensated.

Meanwhile, he plans to mail a more elaborate comment to the planners at a later time. He said he was too emotionally exasperated to submit a well-thought-out comment at the hearing itself.

“Life is life,” Rogowicz stated. “The expansion is expansion, and progress is progress. I see TxDOT’s side of it as well. That’s what emotionally tears me up more than anything.”

“It will change Ovilla,” he added.

To submit a comment for the proposed project, either email or mail the TxDOT Dallas District Office at Nelson Underwood, P.E., 4777 E. Highway 80, Mesquite, TX 75150-6643. Written comments must be submitted or postmarked by March 20 to be included for consideration in project revisions.