Waxahachie, TX - A Waxahachie police officer saved a man’s life during the prayer of the annual Waxahachie ISD Partners in Education luncheon on Wednesday.

As Waxahachie ISD board vice-president Clay Schoolfield delivered the invocation, one of the many dedicated volunteers hit the floor, gasping for air.

Dewy Burkhalter is known for his commitment toward the Cherokee Charmers and assisting with the creation and transportation of props for the Spirit of Waxahachie Indian Band. In fact, he and his son, Chris, had the most volunteer hours documented, 650 hours in total, within the district’s many volunteers. 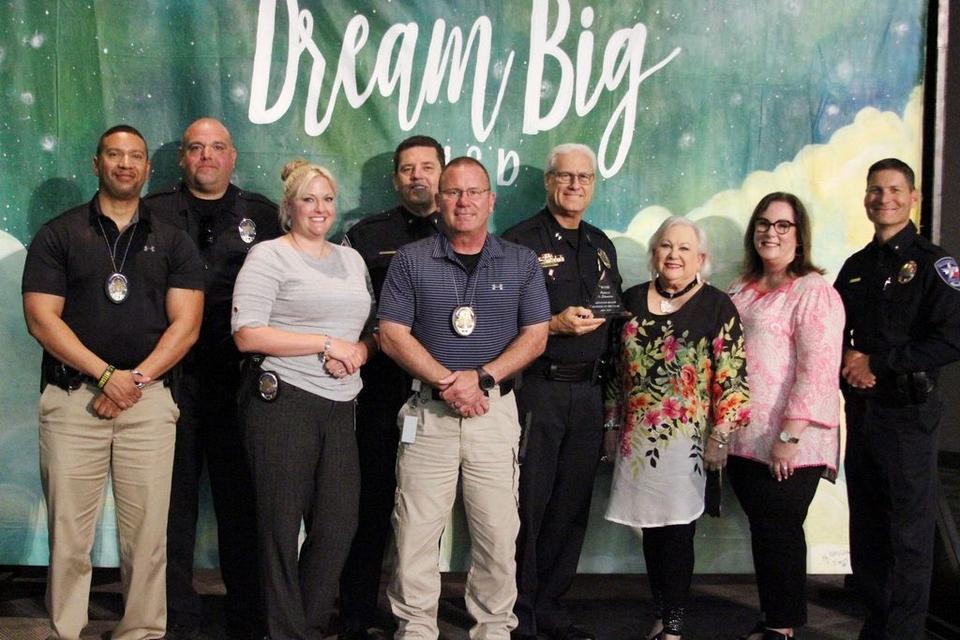 On Wednesday, Burkhalter and his family were seated at a table directly behind the Waxahachie Police Department, which was later acknowledged with the Partners in Education Advisory Board Award.

Officer O.T. Glidewell was one of the police personnel at the table and recalled the woman behind him calling for help and for Waxahachie Police Chief Wade Goolsby.

“I think I coughed and it sucked whatever it was down my throat,” Burkhalter recalled the day after over the phone. “My wife was sitting right there beside me as I was trying to breathe. She asked me, ‘Can you breathe?’ I shook my head no.”

“I saw Dewy holding his throat,” Glidewell said over the phone. “He couldn’t breathe.”

Instinct kicked in as Glidewell left his chair and initiated the Heimlich maneuver. He quickly began to grow more and more worried after each thrust. Glidewell recalled the veins on Burkhalter’s neck beginning to bulge and his flesh turned red.

“He’s a pretty tall man, and by the fifth thrust I knew we had to do something different,” Glidewell elaborated. “I told him to lean over, and on that sixth time I could see him breathing.”

Glidewell has served on the Waxahachie police force for 11 years and had not previously performed the Heimlich on an individual.

“I was really thankful because it seemed like it was taking forever even though it was five or 10 seconds,” Glidewell said. “I’m sure for him it seemed like an eternity.”

Burkhalter, along with several family members, wrote to Glidewell via Facebook to thank him for his life-saving efforts.

“I’m awfully lucky that they were there. They pretty much saved my life,” Burkhalter said.