Waxahachie, TX - Waxahachie emergency officials met Thursday to discuss response protocol to an active school shooter scenario as a way to prepare in case a real-life incident like it were to occur.

Emergency Management Coordinator Rob Best planned and facilitated the table-top scenario at the Waxahachie Police Department, which began with him detailing a shooter that had entered a Waxahachie ISD campus around 8 a.m. Thursday morning. The scenario was fake and used strictly for training purposes. 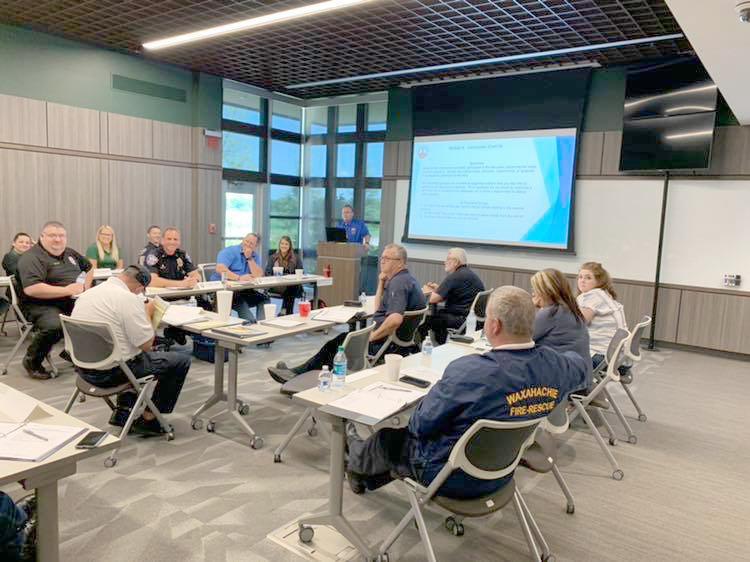 Best said he and the Emergency Management department have been planning the scenario for six months before it was brought to WISD officials, police, fire, EMS services and city and county officials.

“It was amazing to see all these people come together and answer a lot of questions,” Best said.

The training was a way to get a game plan going for the scenario, Best noted.

Best explained that many steps are needed to be taken in a crisis situation, particularly when it involves a school, such as which agency responds to which location, detailing the roles each department plays and even what happens post-crisis with student-parent reunification.

“There were great minds coming together to figure out this challenge,” Best noted.

Best said he couldn’t go into details regarding the plan for safety purposes, but he feels confident in what was decided.

“I can’t go into details, but the community would be extremely impressed with the work done,” he said. “We met a challenge with great solutions.”

Best explained that he looks forward to expanding the table-top training to a live-action scenario on the scene to further perfect responses.

Waxahachie Fire Chief Ricky Boyd said the training was necessary to figure out what to do in a situation he hopes never happens.

During the training, he said the group determined what the different departments can do and where adjustments need to be made before going into a live-action scenario.

“It’s something we think is very important to train on,” Boyd explained.

WISD trustee John Rodgers said, when he ran for his board position a year ago, he focused on school safety, and Thursday’s training was much needed.

“That was something I wanted to focus on after I was elected and we made a lot of progress in that area,” Rodgers said. “This was just another feather in our cap as far as preparing for the unthinkable.”

Rodgers said, as a firefighter, he knows an agency can never be over-prepared for and he is looking forward to future training on a larger scale.

“If it ever were to happen, we’d know we are ready,” he said.

“It was great,” Rodgers explained. “Anytime you can get everybody in the same room to collaborate and systematically go through step-by-step what your protocols are and what you would do if something like this did happen. It just helps to all be there and be on the same page and make sure we’re all moving in the same direction.”