Waxahachie, TX - Jamila Hendricks is a postal carrier, wife, mother, and college student that delivers her load of mail with more than one purpose in mind.

And she lives the large portion of her life on the run — literally.

Hendricks is often seen running, or at least jogging, her daily mail route with the United States Postal Service.

Hendricks has been with the USPS for over six years now. When she moved to the Dallas area two years ago, she weighed in at 270 pounds. Since that time as a carrier for the Waxahachie Post Office, she has dropped a ton of weight.

This vivacious young woman and her husband recently purchased their first home, and now reside in Lancaster with their three young children ages seven, six, and four. Prior to moving to Texas, Jamila and her spouse had determined that they were going to see to it that their children ate balanced and healthy foods each day, and to not become “fast food” junkies.

“I’m not saying that we don’t eat cookies or snack chips some days, but for the most part I cook hot, homemade meals every evening, so we can sit down together and eat as a family,” Hendricks said. “We try to stay away from red meats, and we focus on using fish, nuts, vegetables, fruit and berries as our main staples.” 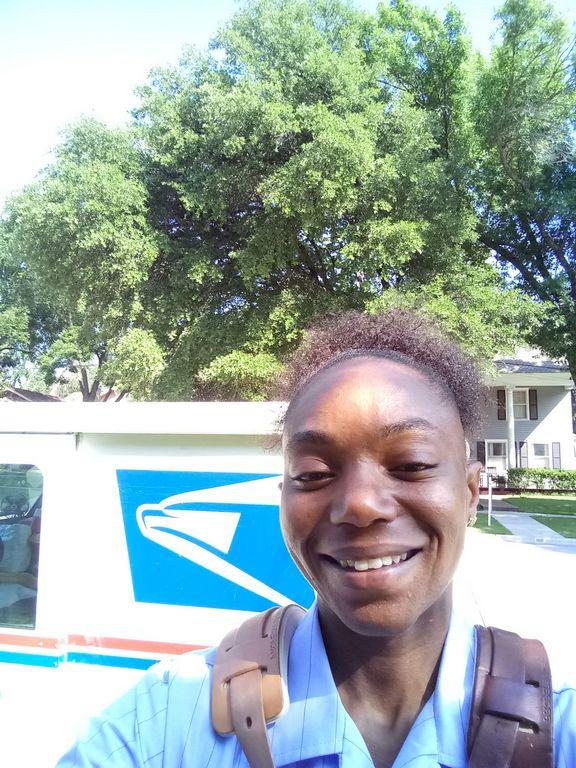 Hendricks, 32, explained her first reason behind running her postal route is because she wants to eat healthily and to continue to stay as fit as possible. This became even more important after her doctor recently told her that she has an enlarged heart, so she may be facing medical issues in her future.

The second driving factor behind her routine is because her post office is continually short-handed, so she wants to complete her route in the shortest amount of time for the station and for the customers that she delivers to daily. That also means that she wants to get home in time to cook the dinner meal for her husband and children.

Hendricks generally works from 8 a.m. until 6 or 6:30 every evening. However, some days are heavier mail days than others and she is still working through 8 p.m. Those 12-hour days can be long and difficult, even for the fittest person.

Hendricks noted her third reason for running is definitely more complex and personal.

“My sister was murdered in Louisiana in January, and I was devastated,” Hendricks disclosed. “Actually, I think I came back to work at the Post Office too early from my pain and grief. However, I feel the Lord used that time to help me heal and to refocus my life of service to Him”.

She added, “God continues to give me the strength to work hard every day. I feel it is my gift of service to the Lord’s people, and I take my responsibilities very seriously as I deliver important mail to my customers along my route each day”.

Hendricks graduated in 2004 from Lynwood High School in Los Angeles County, California. She was a star athlete in basketball and also loved running track. Thus, the Waxahachie Post Office is fortunate to have the services of a great athlete that enjoys her job and gives 100 percent of her effort each work day.

The energetic woman also took time to explain why her family decided to move from California to Texas. Her family was basically from the L.A. area, but her husband’s folks live in the Dallas-Fort Worth Metroplex. They felt they needed to come to Texas, so his side of the family could get to know their children while they were still young. Hendricks can’t believe, that as young as her children are, they still tell her how much they miss the California beaches.

If this busy woman’s life isn’t filled enough, she comes home after eating her home-cooked meal and still has college coursework to complete. She is currently taking online classes from the Colorado Technical University out of Denver. Happily, she will be graduating on July 13 with an associate degree in Science Management.

Hendricks really is a woman who does it all. She is a wife, mother, mail carrier, student, and homemaker — and likely one of the faster mail carriers Waxahachie has ever seen.