Waxahachie, TX - When Sgt. Bobby Gray was called upon to be acknowledged for an award from the Waxahachie Police Department, he had no idea what event took place that had him now standing in front of about 50 people.

“Bobby was in town at a restaurant just eating dinner with his family,” Goolsby began.

At that moment, a look of remembrance overcame Gray’s face. His eyebrows lowered, and a small smile grew on his face.

Goolsby explained that while the Gray family was at the local Taco Cabana, a mentally deranged woman entered waving a pistol in the air.

One member in the crowd said under his breather, “Oh, Jesus.” 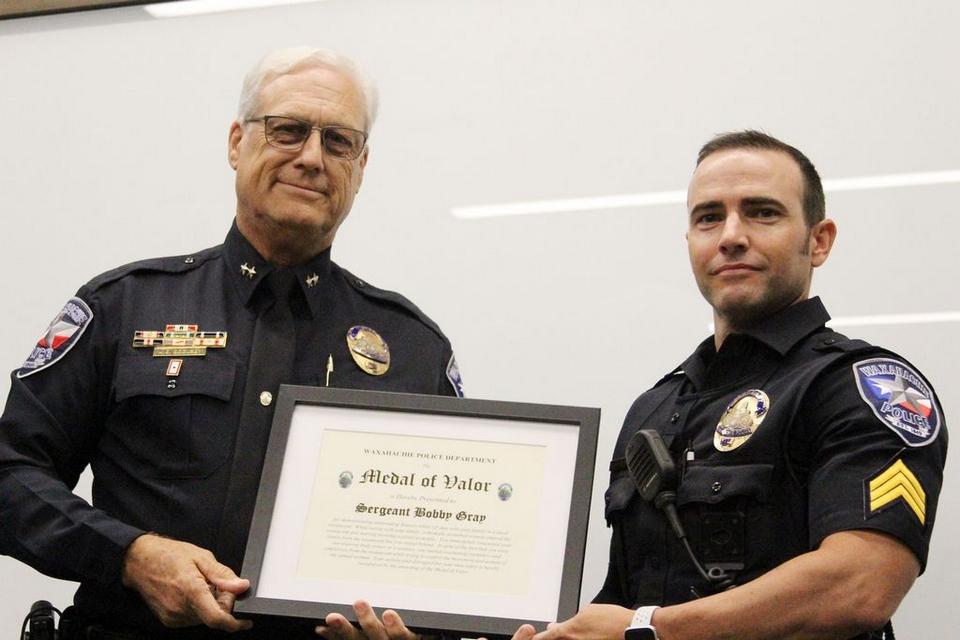 “What most people would have done is gotten the heck out of there and called 9-1-1, and that’s not what Bobby did,” Goolsby said.

Gray told the Daily Light that his career with Waxahachie Police Department began in 2000, and was his first full-time job after he served six years (1993-99) in the Army as a specialist M1A1 tanker.

Gray was not exactly sure when the incident occurred but pictured it in either November or December of 2018.

He was with two of his five children at the local Taco Cabana and had just ordered food. With drinks in hand, Gray began to observe the restaurant, not only to find a seat, “but scanned the room as a typical police officer does.”

He continued, “I happened to see one lady sitting alone, cell phone in one hand and a pistol down by her side in the other so I just backed my two kids out and told them to get out of the restaurant.”

He then took out his badge and identified himself as a police officer discretely to the other customers and employees.

“Most of them fled out the back door,” Gray remembered.

Gray estimated that he was able to evacuate 15 people before he called dispatch. Most of the people were more confused while the officer dressed in jeans, a t-shirt and ball cap advised them to evacuate.

“They didn’t see until they were outside the restaurant the lady had taken the gun and waved it at them,” Gray said.

“She was in her own world, I guess. She never saw me. We never made eye contact,” Gray detailed.

Gray kept a solid eye on the woman and was able to accompany his children outside while officers arrived on the scene.

The woman was taken into custody without incident or shots fired.

This was not the first time for Gray to utilize his authority while off the clock as he recalled stopping a couple of thefts, but never someone with a gun.

“It never crossed my mind that it would be something that I’d get an award for,” Gray said. “Anyone else would have done it while in the same situation.”

The Medal of Valor is one of the highest awards an officer can receive and is a first time for Gray to receive.

“I will wear it proudly,” he said.