‘It shouldn’t have happened’: Waxahachie woman says her dog got sick, died after release from quarantine at local SPCA

Waxahachie, TX - A Waxahachie family is seeking answers after their dog left a 10-day quarantine with a local shelter, was rushed to an emergency vet and ended up dead that very night.

Fluff, a 6-year-old German Shepherd, was surrendered to Animal Control and impounded at the Ellis County SPCA on Jan. 15 for rabies quarantine.

Texas law requires a pet to be monitored for rabies for 10 days after biting someone. A rabies-infected animal with clinical signs will die within 10 days.

Brandi Steele said the usually friendly pet had “snapped” while they were playing at home. 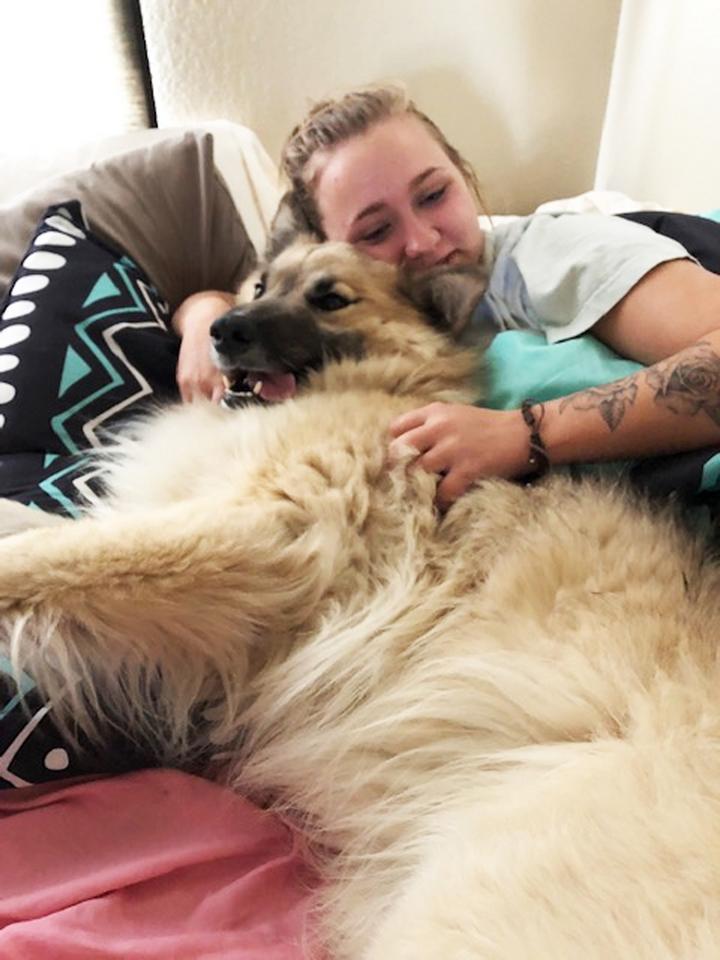 “When he got me, he hit me kind of hard on the chin and I was just so close that the impact shocked me and I passed out,” Steele explained. “I had to get nine stitches and they told us that we could either put either put him down the next morning or we could quarantine him.”

Fluff was released from quarantine on Jan. 25.

“They bring him out and he is soaked from head to toe, dripping,” Steele recalled. “It looked like they sprayed him down with a water hose, and he was sitting there, hunching as he was walking...”

“We were sitting there and we were so shocked, and the smell is just awful,” she added. “It was so bad on the way home, we had to keep every single window down. We couldn’t even get close. It was so awful. He was so weak he could barely get in the car. He was barely even breathing. If we had left him there another night we would have picked up a dead dog the next day.”

The Ellis County SPCA does not deny Fluff was smelly on the day of his release.

“That is something that is, unfortunately, gonna happen with any of our quarantined dogs because they cannot go outside to go to the bathroom, so they have to go in their kennels but they are not left in that...,” countered Joan McGrath, director of the shelter.

“I have no doubt that he smelled bad, and again, if he gets urine and feces on him, which they do, some dogs stay out of it a little bit better than others,” she added. “We can’t handle them so we can’t clean them, we can’t bathe them, and so that’s just an unfortunate part of being in rabies quarantine.”

The shelter director said the kennels, however, are cleaned at least once a day, sometimes more. She said the canine’s kennel was cleaned on the day he was picked up and he was not hosed down as Steele implied. McGrath, however, admitted she was not at the shelter on that day.

“It spilled its water right before she got there,” McGrath mentioned. “I know we gave her a towel. So, not only was he smelly, he was wet, but, no, the dog was not left unattended or left to sit in his own poop and pee or anything like that. It’s just a bad situation when they are in rabies quarantine...”

McGrath also denied the dog got ill in their care.

“During his time here, his observation log didn’t show that he really did anything different,” she said. “The staff seemed to feel like he was pretty much the same, behavior-wise, and eating and drinking and that sort of thing.”

The rabies quarantine check report from the shelter, which the Daily Light obtained, indicated that Fluff growled on most days during periods of observation. He was “mean” on Jan. 20, “happy?” – with a question mark – in the afternoon of Jan. 23 and “still happy?” – with a question mark - on the morning of Jan. 24. By the afternoon, he was described as “tired, sad” and “no change” the next morning.

Steele said she took the dog to the ER an hour after picking him up from the shelter because he would not get out of the car.

“He was suffering so bad,” a distraught Steele revealed. “I can’t even believe that they let him do that and we called and asked how he was, and they told us that he was happy and non-aggressive and eating.”

Steele, however, said Fluff had lost 30 pounds while in quarantine, was dehydrated, had severe pneumonia and a urinary tract infection.

The Daily Light obtained the vet report from Animal Emergency Hospital of Mansfield. It listed Fluff’s weight at 65.8 pounds. The vet observed “flea dirt [feces of fleas], wet, malodor [stench], diarrhea under tail” and “hunched posture over the back, head low.”

The physical exam report also noted Fluff was dehydrated and there was a “profuse green, blood-tinged mucopurulent [mucus and pus] discharge from both nostrils.” He had a high heart rate and made “increased bronchovesicular sounds bilaterally.” The report said Fluff was “not current” on vaccinations.

Lab results showed he suffered from bronchopneumonia and his red-tinged urine was consistent with a urinary tract infection.

“At about 9 p.m. Fluff was noted to drop unconscious,” the report noted. ” He was immediately auscultated and found that the heartbeat was absent. CPR was not attempted due to owner elected DNR [do not resuscitate].”

Steele maintains that Fluffy did not arrive at the shelter with an illness.

“When our dog left, he was completely healthy,” she reiterated. “He was playing in the front yard, in the house, before they came and picked him up. I was giving him treats and water. I was telling him bye. He was in no way sick at all. He came back to us like so underweight. He could barely breathe. He could barely move. It was traumatizing really. I couldn’t believe that hey would let that happen.”

McGrath said the other dog that shared the kennel with Fluff at the shelter was not ill and did not catch anything after Fluff left.

“We have a dog that was in there the entire time Fluff was in there,” McGrath explained. “We still have him and he appears to be fine. So, if Fluff brought it in with him, this dog didn’t get it and he hasn’t come down with anything that showed us any signs of anything like that. I don’t know how he came back sick that fast. I mean, it’s scary, it’s upsetting...”

The shelter has since offered to reimburse the $195 paid to keep Fluff, but Steele wants more to be done.

“I just don’t want this to happen to anybody else,” she stressed. “It happened on one of the worst days it could have happened. My great grandmother passed away. It was her funeral and we were going to pick him up after the funeral... When we saw the condition he was in, it was so terrible we got rushed to the ER. It was a crazy week, a crazy day.”

“If you don’t know how to take care of an animal that’s supposed to be quarantined in your care, you shouldn’t be taking care of them,” she added. “It shouldn’t have happened. He shouldn’t have had to die like that. It’s ridiculous.”

In a message on its Facebook page on Jan. 28, the Ellis County SPCA has promised a full investigation.

“At the Ellis County SPCA, all of our hearts go out to Fluff’s family, as we understand how devastating it is to lose a pet,” the message read. “We take very seriously the events leading up to Fluff’s death... We are currently working to collect all the facts, and are conducting a thorough investigation. It is always our intent to provide the best care possible for the animals in our care.”