Waxahachie, TX - On Monday evening, a tornado not only caused a severe accident on I-35E, but also affected Waxahachie residents, with many displaced from their homes.  Of these families displaced, one father and daughter were thrown about 40 feet away from their home after its roof was blown off.

While Rob Parker is recovering from his injuries, Paizlee Parker was left with minor scratches after he shielded her during the storm.

“That night around 11 p.m., we got a call from my dad," Blaise Parker, Rob's 21-year-old daughter from Anderson, said. "The EMS lady let him borrow her phone, and he said, ‘We got hit by a tornado,’ and once I heard that, my mind is automatically like, ‘Is he OK, but is my sister OK?’ She’s 5 years old. If a tornado were to hit someone's house, you automatically think the worst."

Rob Parker heard the tornado warning and prepared as best as he could, when his house began to shake.

"He knew about the warning, but it wasn’t like evacuate immediately. It was just like, there’s a possible tornado warning in the area. ... I was on the phone with him, and he said, ‘The house is shaking. I gotta go." Blaise explained. "When we hung up, when the house began to shake, he had wrapped my baby sister in a thick blanket around her head and her body and her feet. He was just in his night shorts. No shirt on, his legs exposed. Well he held her underneath him and held her so tight under him that once the tornado hit their house, the impact was so strong. The roof came off, and once the roof came off, they were flown from the inside of the house 40 feet in between a truck and a tree." 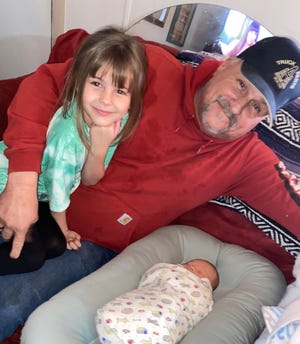 While the tornado roared, Rob held onto his daughter very tightly. After being pulled from their home, the pair landed in between a tree and a car. Rob landed with many injuries.

“The cut on the side is the major injury, other than his leg. We’re still trying to see if he needs surgery or not. There was a cut on his side about 10 inches long, all the way down to his rib bone," Blaise said.

Rob waited for emergency aid for about an hour, in the meantime receiving help from his neighbors as he waited. One neighbor, who had fallen into a pond, swam out to help Rob and Paizlee.

“I hope no one ever has to experience something like we did. I did what every father would do for their child. My children mean so much to me, so I knew I would do whatever it takes to keep Paizlee safe.” Rob said.

The 49-year-old was rushed to Baylor Scott & White Medical Center in Waxahachie on Monday night. He was released on Wednesday.

Currently, Rob has more than 30 staples down his leg, stomach and on his head. He also has road rash from head to toe, and his muscles detached from the bone on his leg. According to Blaise, he has major rehab ahead, but surgery was not required.

Paizlee was released from the emergency room after a few hours with just scratches, going back to school two days later, according to Blaise.

The community has rallied together to help this pair, as they were left with nothing after the storm. On Monday night, Blaise set up a GoFundMe account, not knowing how else to help from three hours away.

On Tuesday afternoon, community members dropped off donations for the family at the Stagecoach Cowboy Church in Waxahachie, a few miles from where the tornado hit. The church also gave away cases of water and food to those in need.