WAXAHACHIE, Texas (CBSDFW.COM) – The Ellis County Sheriff’s Office said it wrapped up a five-month skimming investigation by executing a search warrant and arrest warrant in Dallas on Thursday, May 20.

The investigation stemmed from suspicious activity at a gas station in Ellis County.

As a result, Ellis County criminal investigators determined someone was illegally utilizing, “skimmers” inside the gas pumps.

During the investigation, Ellis County Sheriff’s Deputies noted two men park their Cadillac Escalade next to a fuel pump.

Video surveillance captured one of them access the fuel pump control panel.

The video surveillance also captured a partial license plate which later identified the registered owner as Leandro Nunez-Perez of Dallas.

Nunez-Perez is on Deferred Probation for the offenses of Unlawful Interception, Use, Disclosure or Wire or Oral Electronic Communications and Engaging in Organized Criminal Activity out of Houston.

These offenses are used in cases involving gas pump skimmers, the Ellis County Sheriff’s Office said in a news release.

Investigators traveled all over North Texas and into Oklahoma conducting surveillance and undercover operations on Nunez-Perez’s actions. 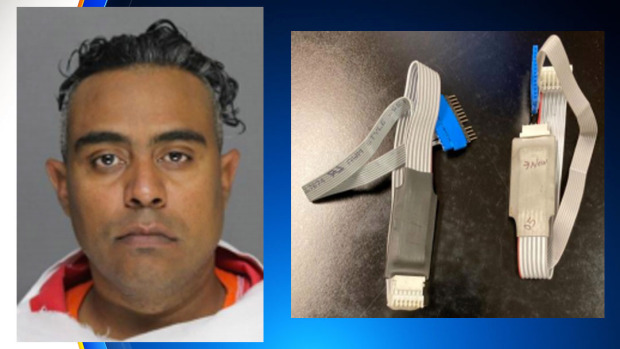 Leandro Nunez-Perez and two skimmers found during the search of his home (Ellis County Sheriff’s Office).

This information led to a search warrant, arrest warrant, and the apprehension of Mr. Nunez-Perez on Condor Drive in Dallas.

The search and seizure of evidence Nunez-Perez’s residence noted several electronic devices known to be used in the re-encoding of gift-cards & debit cards with victims’ stolen card information and an undisclosed amount of cash.

This card information is obtained via, “skimmers” which have been placed inside gas pump control panels.

Consumer tips to avoid fraud at the pump: